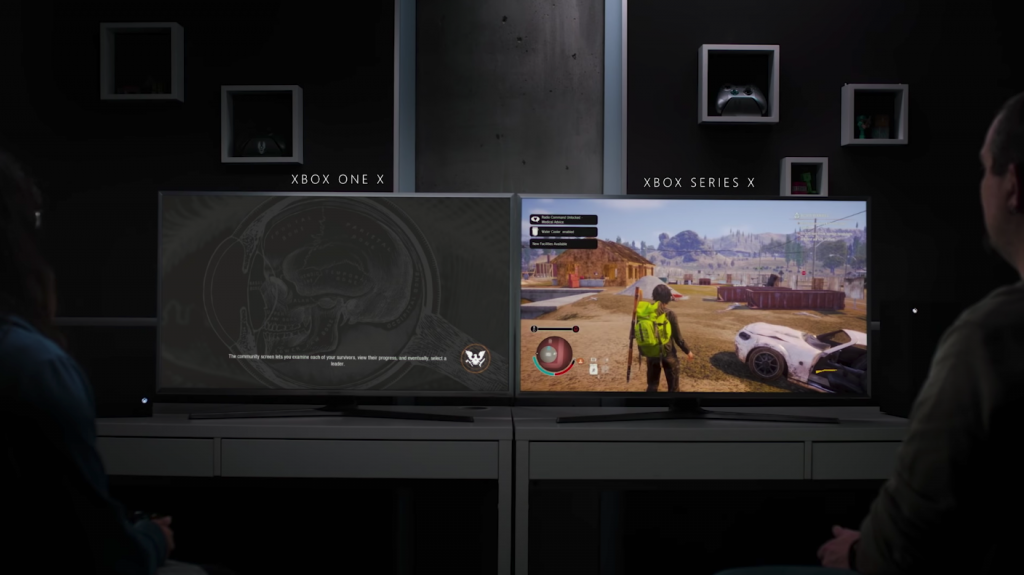 As Sony has yet to share more information about its PlayStation 5, Microsoft continues to own the next-gen consoles narrative by sharing new information about Xbox Series X today. We previously covered all the new hardware details shared by Xbox Wire and Digital Foundry, but the official Xbox YouTube channel has two Xbox Series X video worth looking at.

The first video shows how the Xbox Series X will significantly improve loading times thanks to its custom-designed NVMe SSD. The next-gen Xbox console is put next to an Xbox One X which uses a regular 5400rpm hard Drive, and you can see a comparison of loading times on the first-party game State of Decay 2. Xbox Series X can go from the game’s menu to the map in approximately 10 seconds, while the Xbox One X needs roughly 50 seconds to do the same.

The second video shows the Quick Resume Technology that will allow Xbox Series X to keep multiple games in a suspended state in memory, and resume them in an instant. As seen in a video, it takes less than 10 seconds for the console to resume multiple games such as Forza Motorsport 7, Hellblade: Senua’s Sacrifice, or Ori and the Blind Forest, and it’s quite amazing to see the console remember when the gamer has paused the action. The feature even works for backwards-compatible Xbox 360 games, in case you were wondering.

This video also shows that Xbox Series X currently uses the same Xbox Guide found on Xbox One consoles today. It's still not clear if Xbox Series X will use the exact same Windows 10-based OS, but it would definitely make sense to provide a consistent experience across Xbox consoles from different generations.

Put together, Quick Resume and faster loading times seem to be two game-changing experiences. If the slow hard drives in the Xbox One X has been holding the console down, the custom NVMe SSD in the Xbox Series will deliver a 2.4 GB/s bandwidth (4.8 GB/s compressed, with custom hardware decompression block), which is much faster than regular SSDs you can find on the market today.