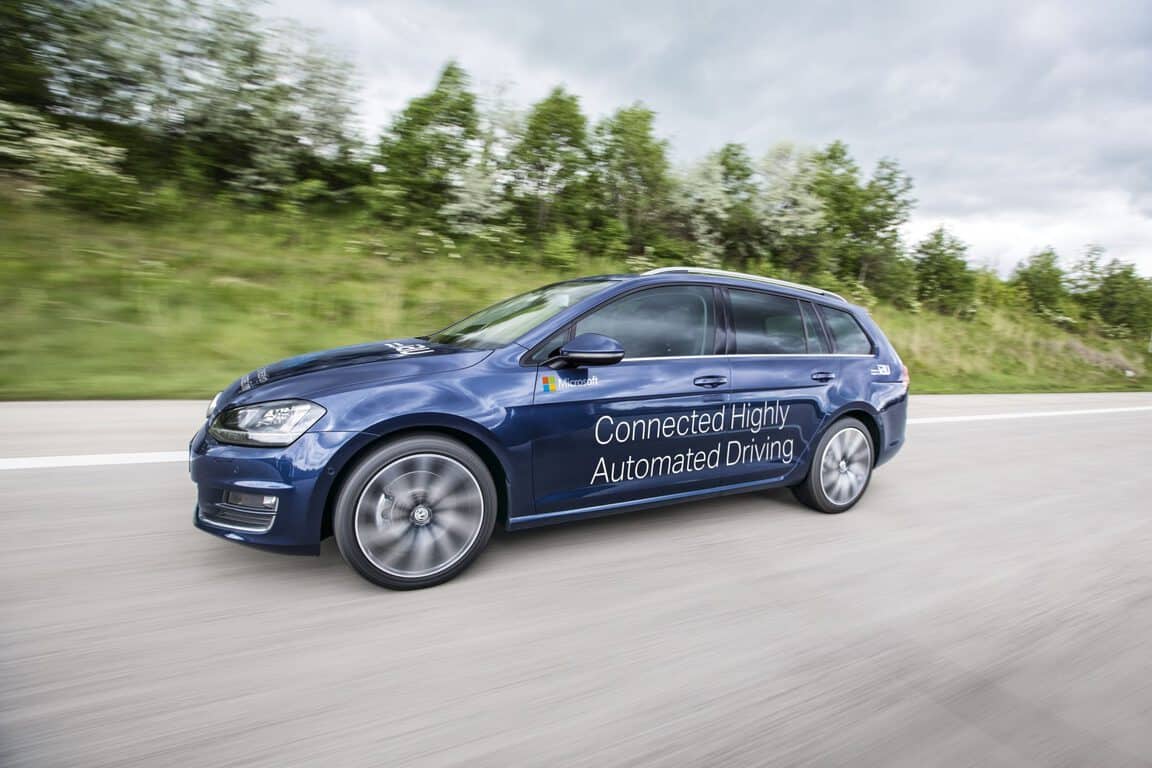 Smart car seems to have become the new hot trend for big technology companies, which makes it understandable, but no less surprising, that Microsoft is developing, or at least collaborating on, one of its own.

The project – part of Microsoft’s new “platform for the Intelligence Revolution” was mentioned by CEO Satya Nadella during his keynote at Hannover Messe 2016, the world’s largest industrial technology fair this April. Thanks to CNN, we can get a glimpse of  the Microsoft-powered self-driving car in action.

A cooperative project between Microsoft and engineering firm IAV, first shown off during the 2016 Consumer Electronics Show (CES 2016), the smart car’s first striking feature is how ordinary it looks. The sentiment is founded, since unlike Google’s self-built roundish creation, the car is more like a normal vehicle filled with connected technology (the highly-visible Volkswagen logo seen from the front betrays its heritage). Nevertheless, from the video, it seems to be pretty capable of most things you can imagine a smart car can do, including driving by itself, slowing down when pedestrians are close, stopping at red lights, and much more.

The car accomplishes all these through what is referred in the video as a “hyper-connected world” where everybody is tied to a connected device, and every device is connected in some way – almost like a spider web with the car being the spider that relies on the web to tell its ways. 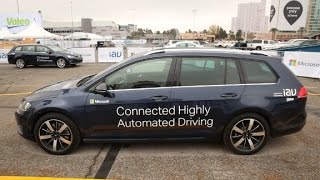 Smart car seems to have become the new hot trend for big technology companies, which makes it understandable, but no less surprising, that Microsoft is developing, or at least collaborating on, one of its own. The project – part of Microsoft's new "platform for the Intelligence Revolution" was menti

Take the pedestrian example: the smart car knows when it’s nearing one and slows down due to the connected Microsoft Band she is wearing. While not everyone is expected to have a Band on their wrist even in Microsoft’s imagined future, the theories behind the technology should work for any other mobile devices, with the smartphone being a prime target due to their increasing ubiquity. The traffic light in the video is also WiFi-connected to be able to tell the car to stop.

What should be more interesting to Microsoft enthusiasts is how the company’s technology is integrated into the car. Nadella mentioned in his speech that Windows 10 can be streamed directly to the car’s dashboard, and while it’s not clear what other functions users get to use, at least Cortana seems to work swimmingly. Microsoft’s virtual assistant is seen used in the video to get weather info, and even send an email.

Microsoft is working with IAV on connected cars

We can only imagine that as Cortana gets more powerful, so will the smart car experience. In fact, Microsoft seems to be going beyond self-driving for its smart car vision, stressing what users can do with the car once the driving part is automated, as the most important.

While the Microsoft-powered smart car works well in the video, it still relies on many external factors to function correctly, like other devices’ connectivity. As mentioned in the video, it will take a while yet before the world becomes “connected” enough for such a solution to work properly. Nevertheless, the car is an interesting approach to a trending topic in technology, and we are excited to see what Microsoft will come up with in the field in the future.