Redstone development branch "rs1_release" showing up for some Windows Insiders

With Threshold 2 now in the rear-view mirror development wise, Microsoft has now turned its focus over to Redstone, the next major update for Windows 10 slated launch in 2016. Internally, development is now way under way, and recently Microsoft began compiling builds in the “rs1_release” development branch, meaning Microsoft is now compiling code into one of the main development branches.
The ‘_release’ branch is usually where Insiders receive builds from. Insiders who recently partook in the Threshold 2 Insider Preview received them from “th2_release”, so for an rs1_release branch to exist is not surprising. However, it appears some Insiders are now seeing an option to switch to the rs1_release development branch, allowing them to download Redstone builds when they become available. 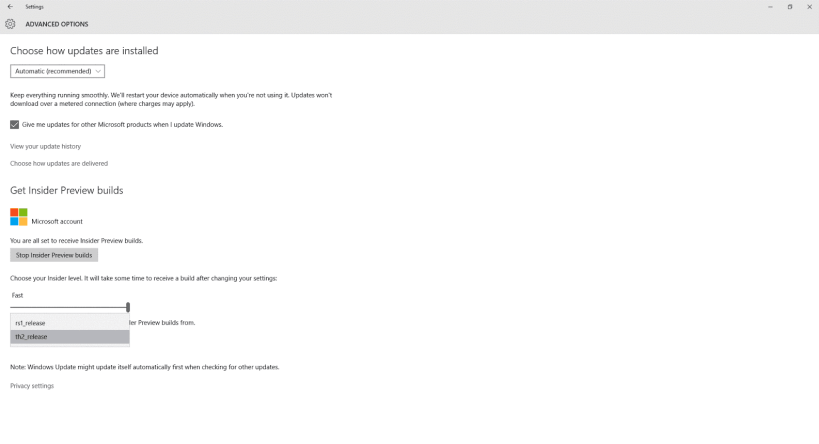 If you look at the screenshot above, you’ll see that below the Fast/Slow slider, there’s a new dropdown menu that includes the th2_release branch and rs1_release branch. I have not seen this dropdown on any of my insider machines unfortunately, but we’ve received a few tips claiming this option is showing up. This could be an error on Microsoft’s part, which would be unfortunate.
What are your thoughts on this? Do you see the option to switch to an rs1_release branch yet? Let us know below.
Thanks for the screenshot, Brendon!