Real Earth won the first place in Microsoft’s Indoor Localization Competition, a well-known annual competition wich brings together real-time or near real-time indoor location technologies to compare their performance in the same space. During the event which featured nearly 50 competitors in 2D and the more challenging 3D category, each team had 15 minutes to locate 15 markers in a large facility in Vienna, Austria, before all results were compared to ground truth.

Real Earth’s STENCIL product was the only one to not rely on infrastructure in the 3D category and only used onboard sensors and efficient algorithms to provide localization. At the end of the competition, Real Earth’s device had the most accurate localization with 0.16-meter average error compared to ground truth. 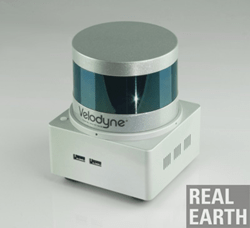 “It has been exciting to be part of this competition and watch our algorithms perform in difficult and dynamic environments. I have seen LiDAR devices evolve since the 1980s from expensive large and heavy devices the size of a microwave oven to the small and lightweight devices of today, such as the Velodyne units. The developments in the near future will prove to be even more exciting as both autonomous and non-autonomous vehicles incorporate these devices.”

While GPS transformed the way people navigate outdoors, accurate indoor localization could transform the way people navigate indoors in a similar way. Microsoft Research adds that “over the last 15 years, several indoor localization technologies have been proposed and experimented by both academia and industry, but we have yet to see large-scale deployments.”