Next month is shaping up to be an important month for Windows users: indeed, Microsoft is expected to release the Windows 10 anniversary in late July, but the company also made it clear a few weeks ago that the free upgrade offer to Windows 10 will end on July 29. If you have yet to upgrade your older PCs to the new OS, Brandon Heenan, Program Manager, Microsoft Edge is explaining in a blog post today how the company managed to make Microsoft Edge the most power efficient web browser on PCs running the upcoming Windows 10 Anniversary Update.

If you rely heavily on your web browser to accomplish most of your tasks on your PC, you may well be aware that these specific kind of apps can in some cases become a real resource and battery hogs. And Microsoft is actually not the only one company working on improving power consumption when browsing the web as Opera recently introduced a new power saving mode that promises to extend significantly your computer’s battery life.

However, Heenan thinks that Microsoft can do better than its competitors as “Microsoft Edge builds on the Windows platform, and benefits from power optimizations throughout Windows.” Today, the company released a video showcasing four identical Surface Books streaming the same video from four different browsers (Edge, Firefox, Chrome and Opera). This experiment showed that battery life on a Surface Book running Microsoft Edge lasted 70% longer than Chrome, 43% longer than Firefox and 17% longer than Opera (with Battery Saver enabled).

Next month is shaping up to be an important month for Windows users: indeed, Microsoft is expected to release the Windows 10 anniversary in late July, but the company also made it clear a few weeks ago that the free upgrade offer to Windows 10 will end on July 29. If you have yet to upgrade your old

In the blog post, Heenan reveals that Microsoft has built a a lab specifically designed for measuring power consumption across a diverse set of Windows hardware, and Edge engineers have been using it to test Microsoft Edge on the newest builds of Windows 10. The companies relies on specialized power monitors which measure instantaneous power consumption down to the milliwatt as well as Windows Event Tracing, a tool which allows Microsoft engineers to “understand what was happening in software, and correlate that to the energy consumed by the machine.”

Furthermore, the company is also using customer telemetry to track energy usage across hardware, apps, and services on Windows 10 PCs, allowing the company to “improve the Windows ecosystem” according to Heenan:

Some of our most important insights come from aggregated data from millions of Windows devices reporting billions of data points around Microsoft Edge’s energy efficiency to Microsoft on a monthly basis. We particularly pay attention to telemetry coming from systems with specialized hardware measurement – you just can’t beat 98% accuracy. 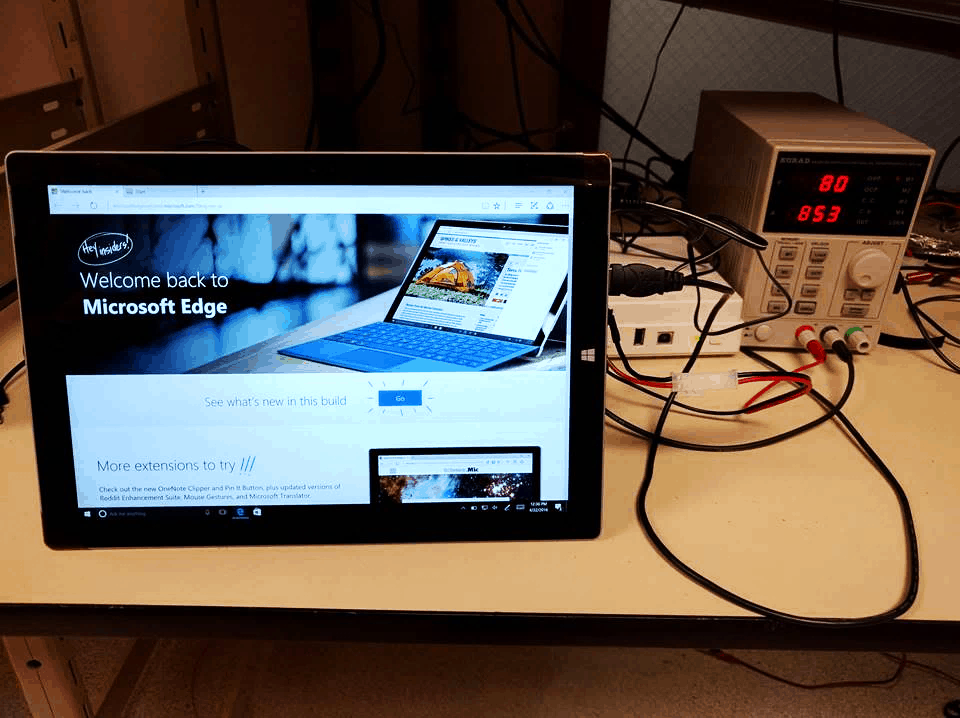 A Surface Pro 3 connected to a specialized power monitor in the Microsoft Power Consumtion lab.

Heenan reveals that users who install the upcoming update will automatically benefit from the following improvements when using Microsoft Edge.

If you’re used to have many background tabs open in your browser, you may be please to know that websites won’t be able to frequently run JavaScript in the background on Microsoft Edge. According to Heenan, these restrictions can deliver “energy savings of over 90% in some scenarios”. He explained:

With the Anniversary Update, Microsoft Edge only executes background JavaScript timers once per second in background tabs. More importantly, these timers are coalesced with other work happening across Windows. Microsoft Edge doesn’t wake up the hardware to perform work. Instead we tag along with other work happening across the system, and then quickly yield, allowing the hardware to enter a low power state.

The built-in Flash plugin now runs inside a separate process

As you may know, Microsoft Edge features a built-in Flash plugin just like Google Chrome does. But as the plugin can often cause significant battery drain, Flash will be running inside a separate process in the Windows 10 Anniversary update, which will allow Flash processes to be stopped when they consume too many resources or crashes without impacting the website. Moreover, Heenan explained that Flash elements which aren’t central to the page will also be paused by default, letting the choice to users to click on the controls to run them.

Microsoft has optimized Edge’s user interface for power efficiency. Heenan shares the example of the reading mode button animation which was previously composed of 120 frames. To improve this, the team has replaced the previous XAML animation with a timed GPU transform which allowed the GPU cost to be reduced by nearly 75%, the CPU cost by 100% and the power impact to near zero.

Last, Heenan explained that the Windows 10 Anniversary update will bring a range of networking improvements which will improve performance and efficiency while reducing power consumption:

The new TCP Fast Open (TFO) feature allows connections between the device and the server to be setup faster with fewer messages. And the TCP stack now includes an optimized Initial Congestion Window (ICW) with a larger maximum message size, meaning fewer messages have to be exchanged with the server. Fewer messages means the wifi antenna can be turned off sooner, saving energy.

We’ve also added features called Tail Loss Probe (TLP) and Recent Acknowledgement (RACK) which reduce the time required to correct for lost packets. If it’s likely that a message is going to time out, we send a request for the data again sooner than the normal timeout. Doing this allows us to switch off the wifi antenna sooner when you have a poor connection.

If you can’t wait to get a more power efficient browser on your Windows 10 PC, Heenan revealed that all these energy efficiency improvements are actually already implemented in the latest Windows 10 Insider builds, so you don’t have to wait to check if Microsoft claims are true. Other Windows 10 users will have to wait for the public release of the Anniversary update later in the summer. Additionally, Heenan shared that “when it comes to energy efficiency, we’re never really done, and you’ll continue to see this level of investment over the coming releases.” It’s great to see that Microsoft is committed to make Edge the most energy efficient browser on Windows 10, and if you’re a Windows Insider please let us know in the comments if you think Microsoft Edge has been more friendly to your precious battery life.