Now that 2018 is past us, we finally have some data about PC sales during the holiday seasons, and they’re not looking really good. According to IDC and Gartner, PC sales in Q4 have been negatively affected by CPU shortages and the US trade war (via ZDNet).

“The fourth quarter is typically oriented toward consumer promotions that help drive the industry's biggest quarter of the year, but the confluence of events in 2018 led to the lowest sequential growth for a holiday quarter since the fourth quarter of 2012,” explained IDC. According to the market research company, worldwide PC shipments reached 68.1 million in Q4, a 3.7% decline year-on-year.

Gartner got almost the same results with 68.6 million PC shipments during the same period (down 4.3% year-over-year). “The impact from the CPU shortage affected vendors’ ability to fulfill demand created by business PC upgrades. We expect this demand will be pushed forward into 2019 if CPU availability improves,” noted Mikako Kitagawa, senior principal analyst at Gartner.

As a reminder, the slight differences between IDC’s and Gartner’s results are because the two companies don’t exactly measure the same products: Gartner only takes into account desktop PCs, notebooks and 2-in-1s such as Microsoft’s Surface Pro, ignoring Chromebooks and iPads. However, IDC tracks shipments of desktop PCs, notebooks (Chromebooks included) and workstations, but they ignore detachable tablets and slate tablets. 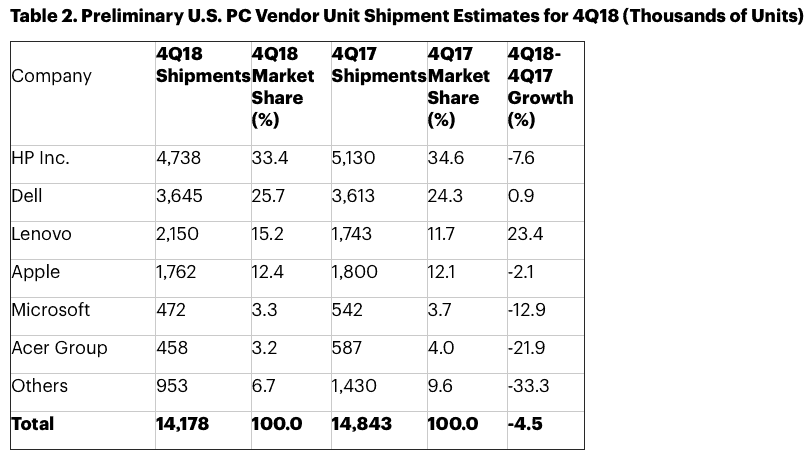 Gartner had more detailed results about the US market, where Microsoft remains the top 5 PC manufacturer behind HP, Dell, Lenovo and Apple. According to the market research company, the Redmond giant had a 3.3% market share in the US in Q4 2018 with 472K PC shipments, down 12.9% year-over-year.