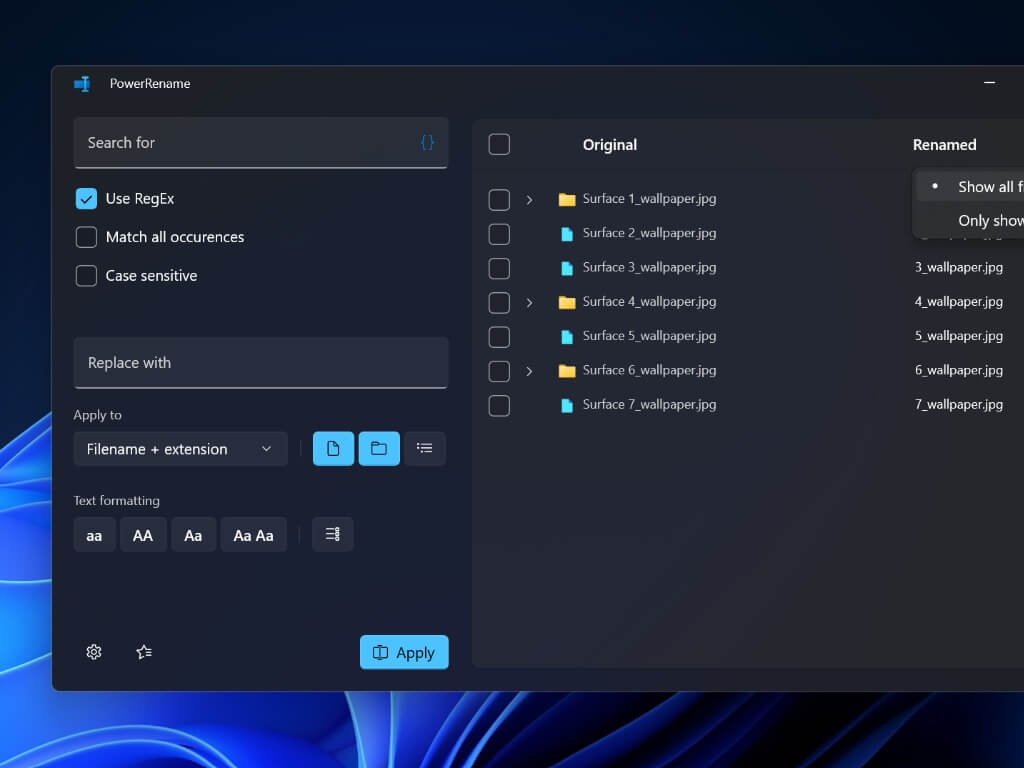 Microsoft is about to release some visual refreshes to the PowerToys PowerRename utility. The PowerToys Settings app gained a Windows 11-inspired makeover a couple of weeks ago, but some other popular utilities have yet to receive a similar treatment.

Yesterday, PowerToys contributor Niels Laute posted a picture of a new PowerRename app on Twitter. This new visual update for the tool draws many UI elements from the Windows 11 design language. These include rounded corners, modern icons, new Windows UI controls, and more.

Ideas or suggestions? Check out the GitHub issue here: https://t.co/LDiZZh7d3M

You can check out the source code of the UI demo (UWP) here: https://t.co/WzYhNHwlOx#Windows11 #Fluent pic.twitter.com/Ika0Tt5TAa

Another notable change in this update is the addition of text formatting capabilities. The PowerRename tool now lets users change the capitalization or alignment of the text while modifying the names of a large number of files. There is also an option to filter file names available in the list.

In addition, Microsoft is adding a bookmarks icon at the bottom of the PowerRename utility based on user feedback. If a user clicks on this bookmarks icon, a jumplist of created bookmarks appears on the screen to show the currently renamed rules and options for the PowerRename tool. Users will be able to manage these bookmarks in Settings.

This PowerRename visual refresh is still a work in progress, though some other power tools, including Color Picker and PowerToys resize, have yet to receive a similar Fluent Design update. These improvements for the suite of tools should hit the Stable channel in the near future. In case you missed it, Microsoft has also released a new experimental version of PowerToys, and you can find more details in our separate post.

Microsoft's next 2021 Surface event may be its biggest yet

Watch as Windows 365 runs on the Surface Duo