PC sales never really recovered since we've entered the "post-PC" world years ago, but this week both IDC and Gartner are reporting that the market finally showed some signs of growth in Q2 2018 (via The Verge). Indeed, Gartner saw a 1.4% YoY growth for worldwide PC shipments in 2Q18, while IDC noted an even higher 2.7% YoY growth.

Gartner and IDC saw worldwide PC shipments reach approximately 62M this past quarter, but it's worth reminding that both companies don't track the exact same products: Gartner only takes into accounts, desktop PCs, notebooks and 2-in-1s such as Microsoft's Surface Pro, while ignoring Chromebooks and iPads. On the other hand, IDC tracks shipments of desktop PCs, notebooks (including Chromebooks) and workstations, but they ignore detachable tablets and slate tablets. 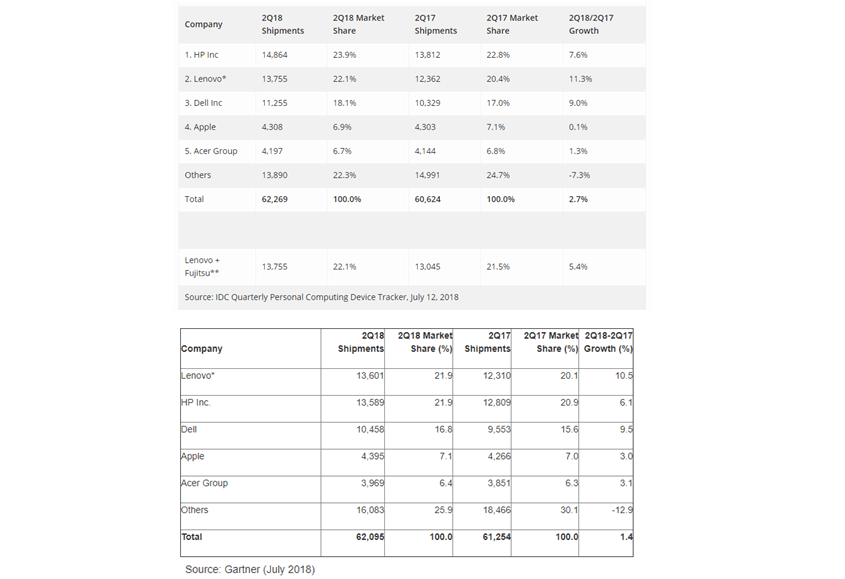 Interestingly, IDC sees HP beating Lenovo as the top PC manufacturer worldwide while Gartner sees the opposite, though in both cases both companies are very close. As for explaining this newfound growth after six years of declining PC sales,
Gartner principal analyst Mikako Kitagawa said that it was "driven by demand in the business market, which was offset by declining shipments in the consumer segment." Jay Chou, research manager at IDC also emphasized this "business-driven refresh cycle," adding that "the market continues to show pockets of resiliency as PC usage experience evolves and improves."

For years now, PC makers have been watching consumers neglect laptops and desktop PCs in favor of increasingly bigger smartphones and tablets. This second quarter probably was a breath of fresh air for manufacturers, even though they probably know they can't bet on business customers to be their main source of growth. On the consumer side, PCs seem to be exciting again, especially as we see more and more laptops with powerful GPUs. Microsoft, Qualcomm, and Intel have also started to push Always Connected PCs, but this is still very early days for this new product category.

New report confirms Andromeda isn't dead, at least not yet