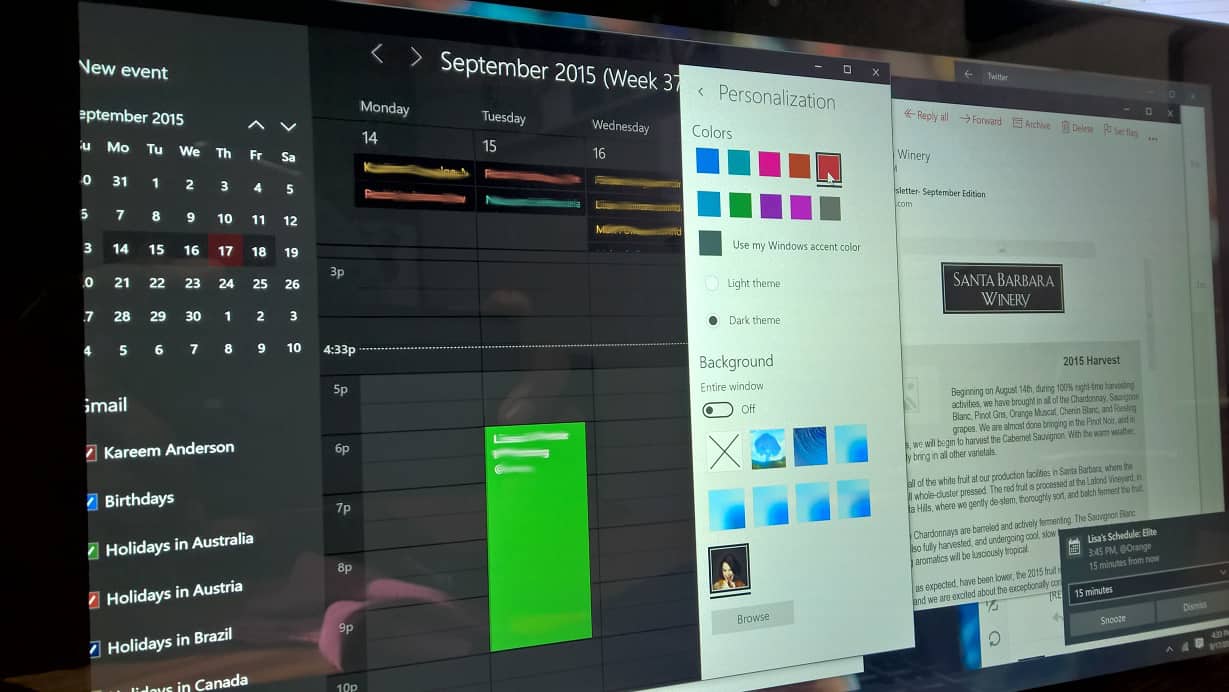 Slowly and steadily the cohesion among features shared between Windows Phone and Windows 10 on both PC and mobile, is finally coming into view. Over the past few months, the Windows team has been inching closer to enabling the long awaited light and dark themes systemwide on the desktop. Windows 10 desktop users can already find hints of the famed Windows Phone ‘light and dark’ themes in apps such as Groove Music and the Edge browser.
In a recent update to Outlook Mail and Outlook Calendar, Microsoft is expanding its light and dark themes to both sets of apps on PCs and Windows 10 Mobile Insider devices. The update to both apps comes with more than just window dressing as well. Both come with a set of noticeable features and refinements.

Since the apps are Windows Universal Apps both sets of apps now come with changes and additions to the settings menus that include new personalization features. The new Personalization Menu is where users will now find the option to switch their app to a dark or light theme. On PC, users can choose an accent color in the Mail & Calendar apps that is different than the systemwide one they may have enabled on the desktop.

Other impressive features include options for S/MME encryption, automatic digital signatures, as well the return of the ellipses on mobile. The hamburger menu is no longer the only way to pull up menus in either the Calendar or Mail app on mobile. Users can now find the more Windows Phone style ellipses at the bottom of both apps to toggle in and out of menus.
Smaller refinements can also be found in the opening of menus bars with the a nice little slide out effect. Action icons have also been moved to the right each app.
Unfortunately, not all the changes were good. For some reason the mobile apps no longer deep link to one another. Previously, selecting dates from the Mail app would automatically launch the Calendar app. Now users will need to open each app separately, perhaps not a big game changer, but cumbersome nonetheless. We can only image this is a bug related to the update and should be ironed out before the launch of Windows 10 Mobile.

Those have been our initial findings with a quick run through both sets of apps.
We’re sure there are some we are missing; please feel free to add your findings in the comments below.
Happy downloading, Insiders!