Microsoft announced today that Multi-Geo capabilities in Office 365 are now generally available. With this new feature, IT admins can now move Office 365 user data between multiple data center geographies, and also set up specific sharing and configuration policies for each Geo.

Multi-Geo has been in preview since last year, and it's only available for Exchange Online and OneDrive as of today. “With Multi-Geo, customers can choose in which Geo each user’s mailbox contents (e-mail body, calendar entries, and the content of e-mail attachments) and OneDrive uploaded files are stored at rest,” the Redmond giant explained today. “Microsoft commits to providing in-Geo data residency, business continuity and disaster recovery for your core customer data.”

Multi-Geo won’t be available for all Office 365 subscription plans, as Microsoft will only license it to customers with a minimum of 5,000 users. The company announced a $2/user/month license for users in “Satellite Geos,” which are the additional data center where Office 365 admins can choose to store Mailboxes and OneDrive files. Microsoft announced 9 available Geos worldwide, with France coming soon. 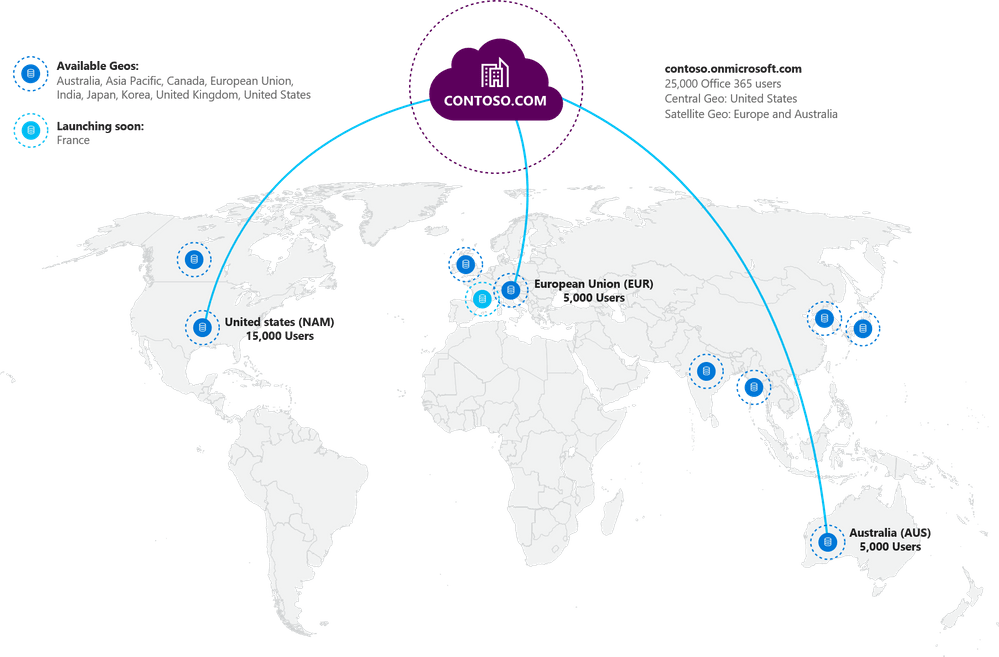 Despite its current limitation to Exchange Online and OneDrive, the new Multi-Geo capabilities should make Office 365 even more flexible and attractive for businesses. Microsoft also said today that it's planning to add support for SharePoint Online and Office 365 Groups "soon," and other Office 365 workloads are also being considered.