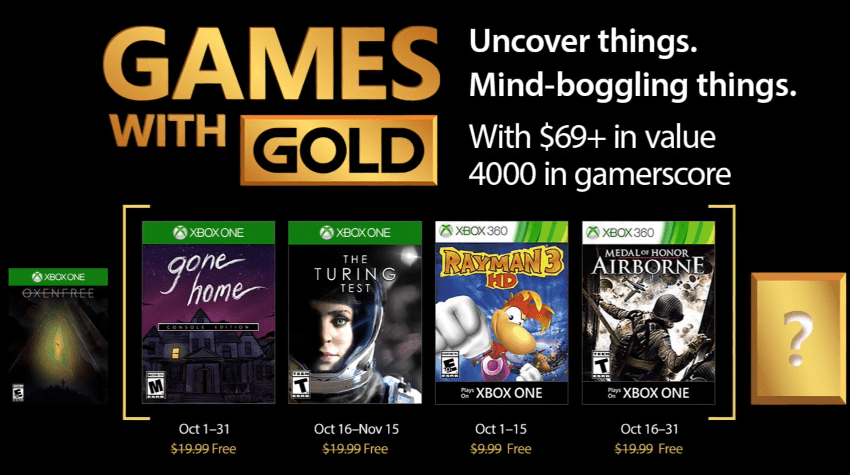 As the end of September is almost upon us, Xbox’s Major Nelson has just announced October’s Games with Gold titles. Starting October 1, Gone Home: Console Edition and the Xbox 360 title Rayman 3D will become free for Xbox Live Gold subscribers, followed by The Turing Test and Medal of Honor: Airborne on October 16. You can find all details about these four games below the video teaser.

Gone Home, the genre-defining Story Exploration Video Game, is now available in the comfort of your living room! June 7, 1995. 1:15 AM. You arrive home after a year abroad. You expect your family to greet you, but the house is empty. Something's not right. Where is everyone? And what's happened here? Find out for yourself as you explore the house on Arbor Hill in the award-winning game that’s been called “a remarkable achievement” (IGN) and “the greatest video game love story ever told” (The New York Times). Experience one of the generation’s defining indie games plus more than 90 minutes of behind-the-scenes commentary by the developers, actors, and musicians that made Gone Home possible!

The Turing Test is a first person puzzler that explores the phenomena of consciousness and challenges the meaning of human intuition. Take control of Ava Turing, an engineer for the International Space Agency (ISA), and progress through a narrated story of introspection and morality whilst uncovering the hidden mysteries of Europa. Delve into The Turing Test’s human interaction puzzles and arm yourself with logical and methodical thinking. Take on tests designed in such a way that only a human could solve them. In an evolving story based on mankind’s inherent need to explore, protect and survive; players search deeper into Europa’s ice crusted core and transcend the line between man and machine.

Embark on a fantastic and humorous journey with Rayman and Globox to save the Crossroad of Dreams. Masterfully enhanced with eye-popping High Definition visuals and sounds, Rayman 3 HD is the definitive version of the Rayman classics “Rayman 3 Hoodlum’s Havoc”, and a must-play for all Rayman fans and platform adventure game enthusiasts. Run, Jump and punch your way through the 2 first levels of the game battling the mysterious Hoodlums and their minions.

Take to the skies in Medal of Honor Airborne, where your choices will turn the tide of WWII. Starting with your jump from a C-47, every choice you make can seal your fate. In the air, control your parachute to select the landing spot that brings you the greatest strategic advantage. On the ground, explore the open, vertical environment for positions that will provide you a tactical edge against your enemies. Then, head onto Xbox LIVE for furious multiplayer battles in three different modes, including all-new Airborne modes! You decide where to drop, you decide how to fight. It's a different war every time.

Overall, we're looking at $69+ in value, which is slightly inferior to the $94 value for this month's Games with Gold lineup (mostly thanks to Forza Motorsport 5 Game of the Year Edition). Price doesn't equal quality though, and all these games (especially Gone Home) have received positive reviews. Let us know in the comments which of these games you're most excited to play next month.