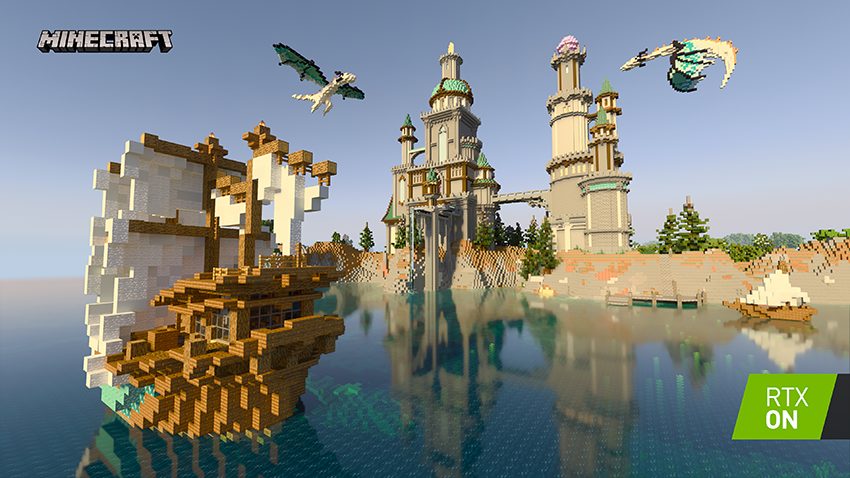 It’s been almost a year since Minecraft developer Mojang announced that the game would get ray-tracing support on Windows 10, but Nvidia is finally ready to deliver. With a new beta of Minecraft for Windows 10 that will be available on Thursday, April 16, players will Nvidia GeForce RTX GPUs will be able to experience Minecraft with fully path-traced rendering, thanks to Nvidia’s DLSS 2.0 real-time rendering technique.

Nvidia has teamed up with Minecraft creators to deliver 6 free RTX Creators worlds that will be available in the Minecraft Marketplace. "The results of Minecraft with ray tracing are astounding – realistic hard and soft shadows are seen everywhere; global illumination realistically lights the world, with that light filling interiors through windows and gaps in the terrain; illuminated blocks and other light sources cast pixel-perfect lighting; reflections are seen on all reflective surfaces and blocks, with a level of fidelity far surpassing that of screen space reflections; light reflects, refracts and scatters through water, ice, stained glass, and other transparencies; and atmospheric effects occur naturally, resulting in high-quality volumetric fog, and pixel-perfect god rays,” Nvidia explained today.

Minecraft's clearly dated graphics didn't prevent it to become one of the most popular video games ever released, but ray-tracing really turn the sandbox game into something different. You can see how this Minecraft with RTX beta looks in the video below:

If you have a GeForce GTX GPU, Nvidia says that players will have the best experience by installing new Minecraft with RTX Game Ready Driver that will be available tomorrow through the GeForce experience app. As for the beta, you'll be able to install it through the Xbox Insider Hub app on Windows 10. Be aware that you'll need to own Minecraft for Windows 10 to sign up. Microsoft To Do added to Microsoft Mobile Apps and Experiences org