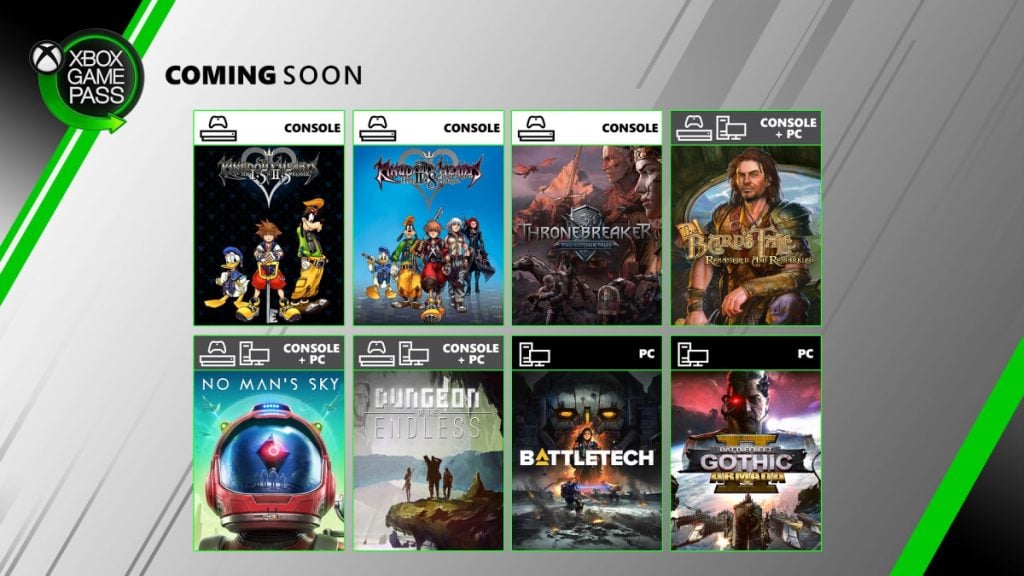 Microsoft announced a big update for the Xbox Game Pass catalog this morning. Three new games are coming to Xbox Game Pass for Console and PC this month, starting with No Man’s Sky and Dungeon of the Endless tomorrow, June 11, which will be followed by Bard’s Tale Remastered and Resnarkled on June 18.

Console subscribers will get three additional games this week, including Kingdom Hearts HD 1.5 & 2.5 ReMix and Kingdom Hearts HD 2.8 Final Chapter Prologue on June 11, plus Thronebreaker: The Witcher Tales on June 18. Additionally, Xbox Game Pass for console subscribers are invited to check out the free UEFA Euro 2020 DLC for eFootball PES 2020 this month, as well as a free upgrade for The Elder Scrolls Online: Morrowind.

There are two other new games to mention for Xbox Game Pass for PC, with Battletech and Battlefleet Gothic Armada 2 to be available on June 11. Moreover, Obsidian Entertainment’s new survival game Grounded will be available for pre-install on June 16 on PC and console ahead of its Xbox Game Preview debut on July 28.

The Xbox team also revealed today a list of 11 games that will leave Xbox Game Pass on June 15. You can find all platform details below:

While there's no E3 2020 this year, it's good to see that Microsoft still kept some exciting announcements for Xbox and PC gamers. It's not clear if we should still expect a June "Xbox 20/20 update" to follow last month's Inside Xbox live stream, but hopefully, we won't have to wait until July to get some next-gen Xbox news.