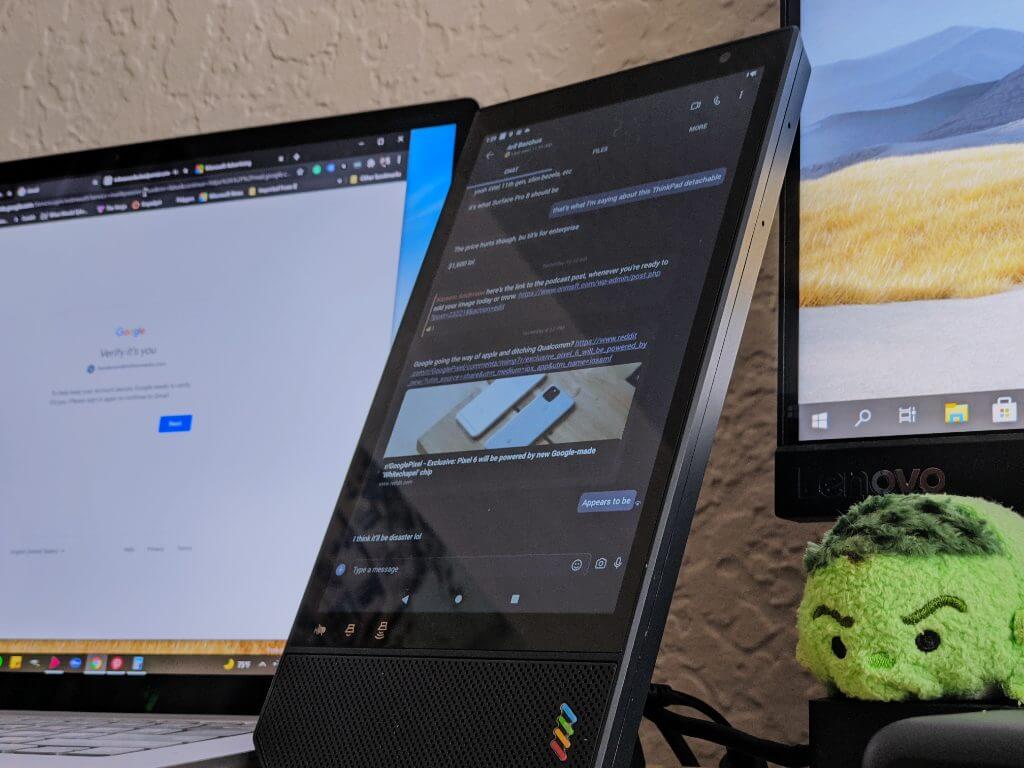 As the balance between in-person and video conferencing shifted through the pandemic, dedicated peripherals supporting work-from-home communications have blossomed.

Enter the Nexvoo NexPad Pro T530, a collaborative effort between Microsoft, Android and the company Nexvoo.

The result of this odd collaboration is a Microsoft Teams certified video conferencing Android tablet with full access to the Google Play Store and Suite of solutions.

The high notes of the Nexvoo NexPad Pro T530 are that out of the box, it runs Android 10, comes with a 4K ultra-HD video camera, FHD display, stereo microphones, support for Bluetooth 4.2, dual-band Wi-Fi, all wrapped in under one pound Google video conferencing certified tablet. 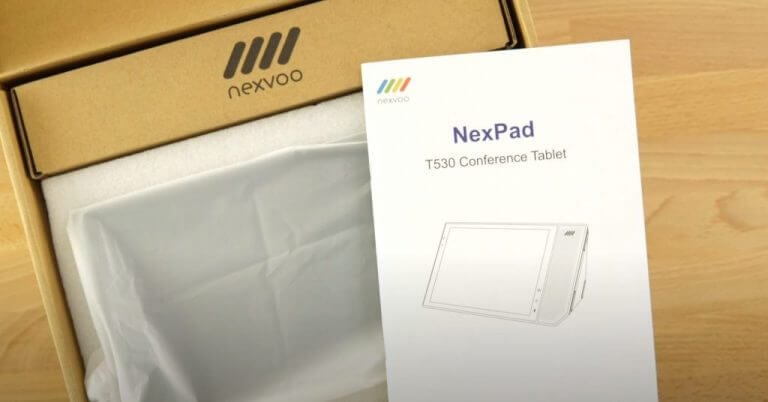 What’s in the box

The NexPad resemble a lot of recent attempts from companies to deliver dedicated in-home assistant displays such as the Nest Hub Smart Display or the Lenovo Smart Display.

At around nine and a half inches wide and 5/8 inches thick, the matte blac folded origami-like design does its best to maximize the NexPad's overall footprint which takes up about as much space on desk as the average Bluetooth speaker.

There are rubber stoppers on both its vertical and horizontal sides to allow for positioning in either landscape or portrait conferencing views. The consideration of viewable orientations won't go unnoticed by users with limited desk space.

While it's roughly a pound in weight, the NexPad does feel dense which leads premium feel despite its rigid plastic casing.

Scanning around the device, users will find the connectivity ports on the back/bottom of the tablet tucked awayin the bulk fold of the design, which can make getting to a bit of an issue. The grooves carved out for the Kensington Lock, power, and 10/100 Ethernet port are deep, which helps establish a secure connection but a pain when trying to unplug for adjustments. 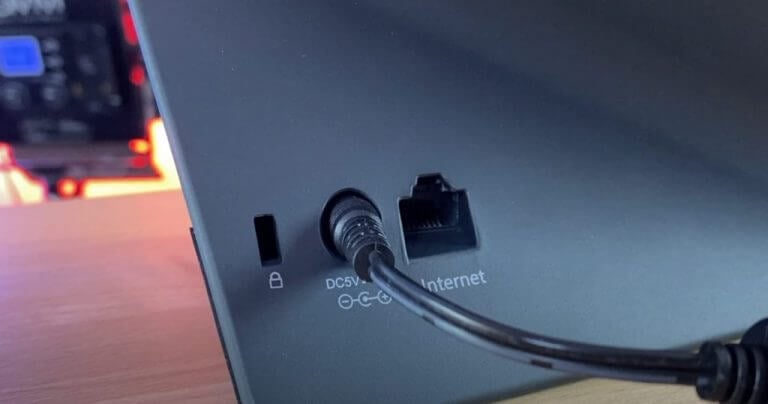 On the other side of the bulk fold is the HDMI out port as well as the housing for the speakers. There are two tiny holes along the top/side of the NexPad for mics, a camera shutter adjacent to them and webcam embedded in the bezel of the screen.

Speaking of screens, the NexPad's screen a modest 8-inch 1900x1200 FHD display with average sized bezels around the outer walls and looks to push around 300-400 nits of brightness.

Depending on where the NexPad is placed, you could get some decent glare off the glossy touchscreen, but for the most part, the display on the device is serviceable and works well as dedicated viewable video conferencing device.

The touch responsiveness isn't as smooth as anticipated but as a dedicated communications device, it does the job decently enough.

With most of the attention paid to the screen's output of software on the NexPad, the performance was on-par with Google's Nest devices and about a step above Lenovo's dedicated telecommunications effort.

Despite it running Android 10, the responsiveness of the OS is great, and the functionality built into both Google and Microsoft services helps extended the NexPad's value-proposition. Multiple user accounts are supported, so if you share a conferencing area with someone else or this device is used by multiple people, keeping profiles and apps selections separate is a nice addition.

Anecdotally, hardwiring in with an Ethernet cable provided me the snappiest connectivity to Teams, Google Calendar, Office 365 apps and Gmail.

With full access to the Google Play Store, you can set up the NexPad as any other Android tablet and load it with more than just Microsoft Teams. Apps such as Google Duo, Meet, Zoom, WebEx, and Go-To-Meeting are all available and work as expected while using a Snapdragon 450 with a poultry 3GB of RAM.

The most important performance metrics are the sound and video quality which were surprisingly good. 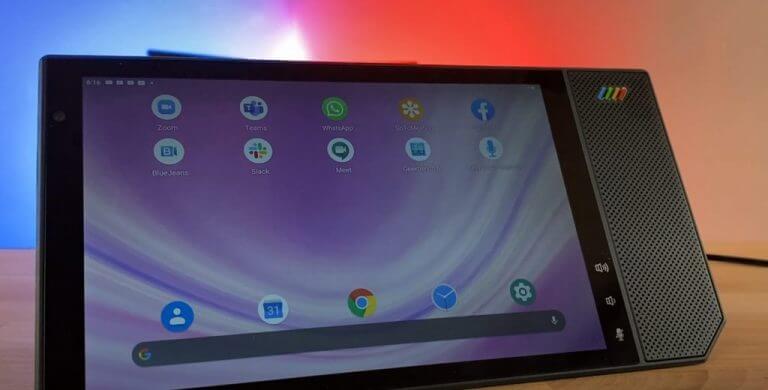 For a single speaker output the sound is loud, clear and heady with minimal ting to voices. On the camera side of things, your conference mates will see a 4K at 30fps UHD resolution image with very natural colors. At certain angels, the camera mimics the coveted bokeh effect of more expensive DSLR cameras.

As for sound your conference mates hear, the 2-element beamforming microphone array sends a clear sound that does its best to suppress background noise. In a medium size office, you might get a bit of an echo depending on how the NexPad is placed on a desk.

When it comes to more recreational use as a workspace speaker to listening to podcasts or lo-fi ambient background noise, the NexPad can double as a Wi-Fi enabled speaker, but it's not recommended. The speaker and microphone array seems especially keen on transcoding live voices and sounds and not compressed audio. 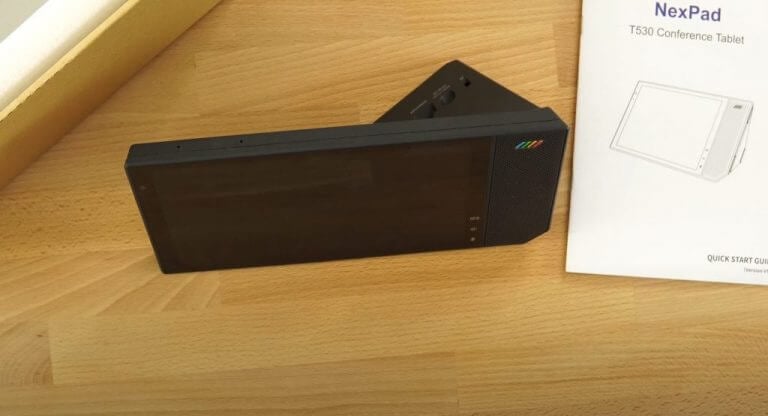 The NexPad can service double duty as mini-YouTube player, Spotify, or Pandora streamer or even a Netflix box on a lunch break, but it excels as mostly video conferencing.

At $500 the NexPad Pro does come in a bit higher than some of its more tablet-like competition while only sporting average specs and software. However, as a dedicated conferencing device, it works well, is easy to setup, and provides a overall pleasant experience for someone who spends a majority of their time on camera and in meetings.

Comparatively speaking, people can opt for a simple $50 Amazon webcam, another $70-100 Bluetooth/USB speaker, probably a $35 dongle and have a sprawling dongle desktop surface to get a quasi-related experience.

However, what's not accounted for is the fact the NexPad serves as a dedicated peripheral which allows users to freely use their computers without fear of accidently sharing screens, repositioning a laptop every conference call as well as worrying about call lengths due to battery power.

In the end, $500 is a bit pricey for a Teams or Zoom box, but for someone who spends some if not most of their time in video conference calls, the total value of the NexPad will most likely be recouped in the first month or so.