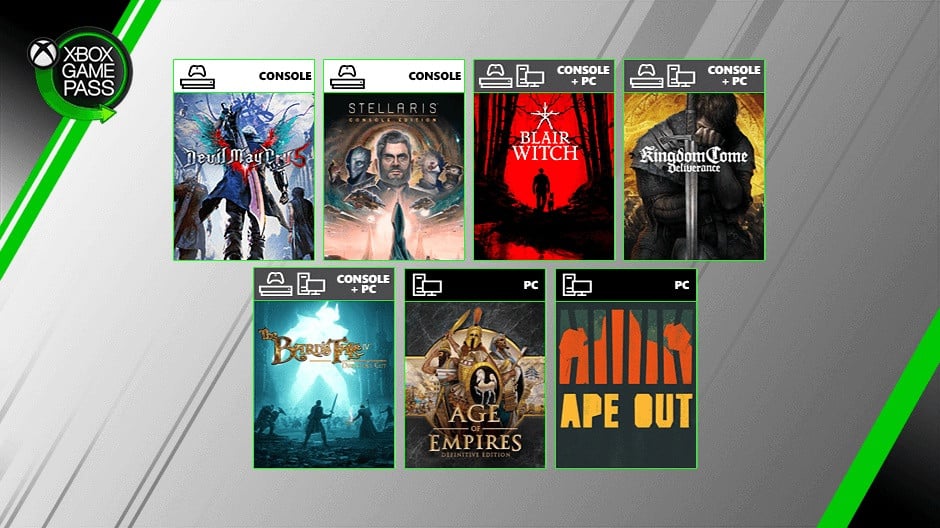 Microsoft has just kicked off its special Inside Xbox episode with some exciting Xbox Game Pass news. Devil May Cry V and Stellaris: Console Edition are now available in the console catalog starting today, and Age of Empires Definitive Edition is also available on PC starting today.

Four more games will be available later this month, starting with Ape Out (PC) and Kingdom Come Deliverance (console) on August 22). The Bard's Tale IV: Director's Cut, an Xbox Play Anywhere game will also be available on both console and PC on August 27, and it will be followed by the brand new Blair Witch game (also for console and PC) on August 30.

In addition to these new Xbox Game Pass additions, Microsoft also announced some updates to the new Xbox beta app for PC: There will be new filters, more options to manage downloads, as well as the ability to search for friends from Facebook or Steam. Microsoft is also copying Discord by allowing users to add a link to their YouTube, Twitch, Twitter, Discord, and Reddit accounts on their player cards.

We’re excited about the progress we’re making to deliver a great Xbox Game Pass for PC experience and we will continue to deliver more improvements over the coming months based on your input, so please keep the feedback coming," the Xbox team said today.