Over the past couple of months, we’ve learned a lot about Microsoft’s Andromeda/“Surface Phone” device through the never-ending stream of patents obtained by the company. Today, two new Andromeda-related patents have been published, and they reveal some interesting innovations that Microsoft has developed to make a foldable device something you’d like to use every day.

At this point, Microsoft is just developing it in public. https://t.co/Lv9QeIRgWp

One patent is titled “Curved Edge display with controlled luminance,” and it describes a prismatic luminance-correcting layer bonded to the light-releasing surface of a curved OLED display. This patent is all about reorienting the light emitted from the curved portions of the displays so that the person looking at it will see a plane image, as explained below:

The second patent is titled “Input based on interactions with a physical hinge,” and it describes how sensors on the foldable device could enable hinge gestures by measuring a first angle of the hinge and then sensing movements. As the patent explains, the hinge gestures could allow the foldable device to transition between a multitasking state and a single tasking state, though some “additional input signals” could be added to the mix for more complex gestures: 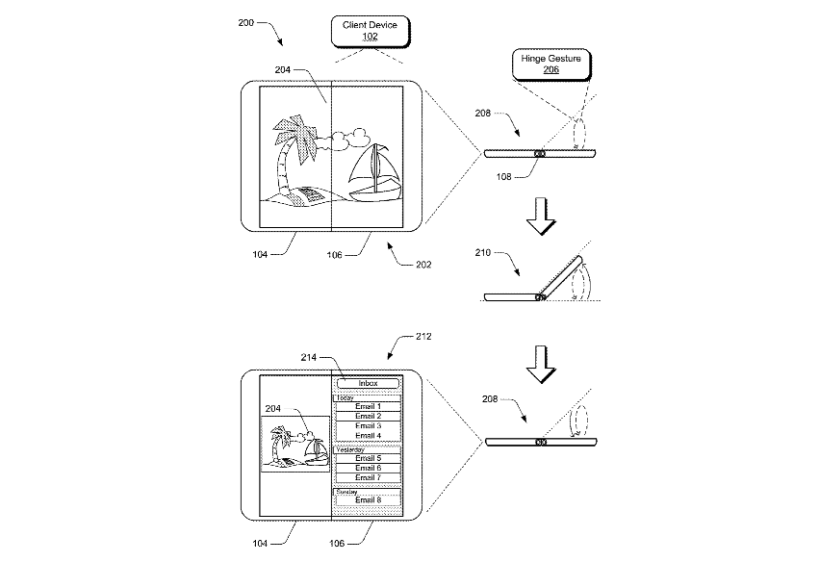 This is all very interesting, and Microsoft is definitely looking to make this hinge a core part of the navigation. If this Andromeda device eventually sees the light of day, it seems that it will be really unique and there should be a learning curve for users. Anyway, after revealing so much about this device through patents, it would be really too bad if the Redmond giant doesn’t release it. Microsoft always said that its Surface business was about pushing boundaries and creating new product categories, and even if there’s probably not a big market for a foldable mobile device as of today, it would be a breath of fresh air at a time when smartphones and tablets seem to have plateaued.