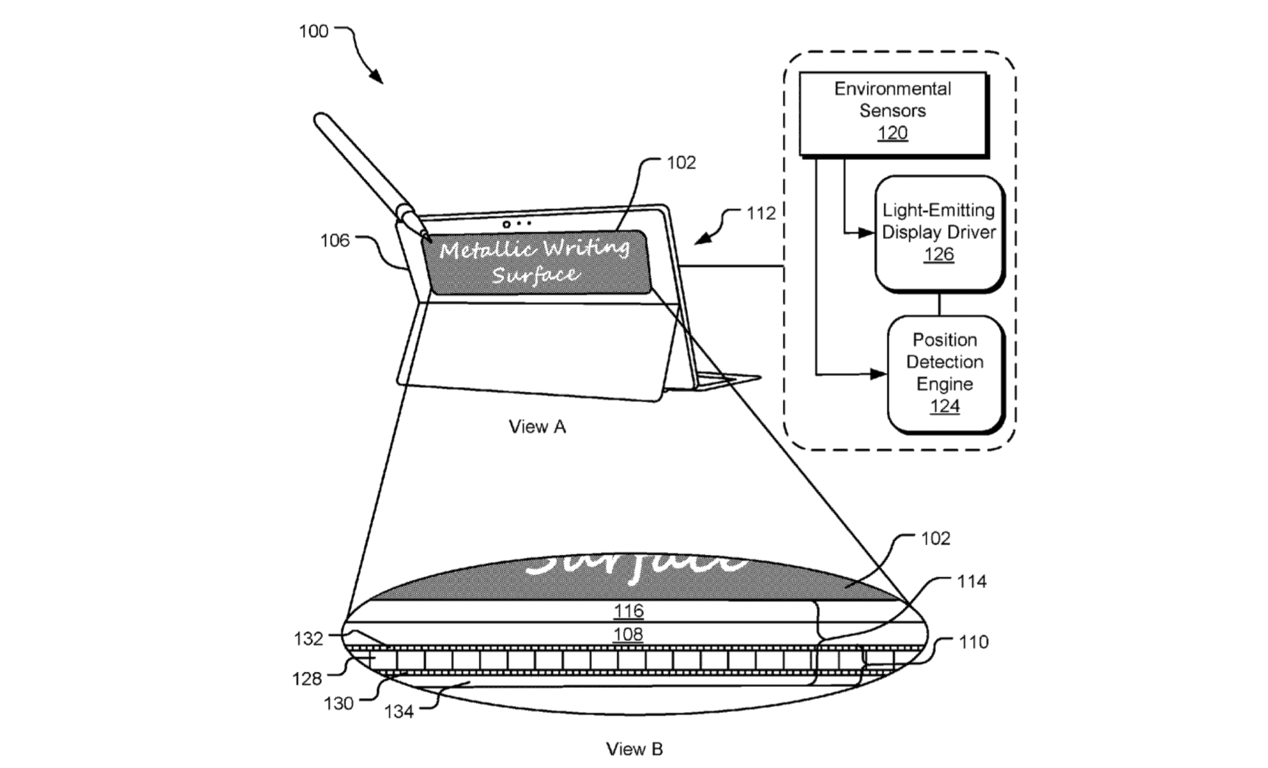 A couple of weeks ago, a new patent apparently related to Microsoft’s “Andromeda” foldable mobile device revealed that the company was interested in giving a new purpose to unused surface areas. In the case of Andromeda, the patent described how the foldable device would allow users to ink on its external cover with a stylus or finger while the device is closed.

Yesterday, a new Microsoft patent for a “Reflective Display” was published, and this one describes a slightly different way to make the external surfaces of our mobile devices more useful (via Digital Trends). The different drawings represent a tablet that looks pretty much like Microsoft’s Surface Pro, but with a light-emitting display on its back right above the tablet’s kickstand. “The light-emitting display may be, for example, an LCD, LED, or OLED display or other type of display including an array of pixels that can be selectively and independently illuminated to emit light in the visible range,” the patent description reads.

Interestingly, the patent mentions a technique to make the display appears completely metallic, making it blend perfectly with the surrounding areas of the tablet’s back. By only illumaniting select pixels of this display, Microsoft could also recreate the “Glance screen” feature found on old Lumia phones, but in our case the text would appear on a metallic-looking surface.

In one implementation, the reflective multi-layer structure appears ‘metallic’ at the external surface, such as to create an illusion of uniformity in color and tone between the display and other external components of the electronic device. By illuminating pixels of the light-emitting display, the computing device can, in effect, display information in the form of illuminated markings on an opaque (e.g., metallic-toned) backdrop.

Last but not least, the patent also mentioned that this additionnal display could also support touch input, allowing users to write text and more while only illuminating pixels that have been in contact with a finger or stylus:

Some implementations of the disclosed technology further integrate touch sensing technology to facilitate use of the reflective external surface as an interactive writing surface. For example, a user may draw on the reflective external surface with a finger or stylus and the underlying display may selectively illuminate pixels at corresponding locations of the light-emitting display.

As usual, keep in mind we often see a lot of cool new technology in Microsoft patents, but that's no guarantee that these innovations will materialize in actual products. Would you like to have a form of "Glance screen" on the back of your Surface, and do you think that there are a lot of possibilities to leverage unused areas of our electronic devices? Sound off in the comments below.