New meetings and webinar capabilities in Teams, Show Changes feature for Excel, and more – what’s new in Microsoft 365 in April

Microsoft has published its monthly recap of new features and capabilities added to the Microsoft 365 suite of apps and services. This time around, the company has detailed a bunch of improvements made to Microsoft Teams, Word, Outlook, and Excel, along with some updates to other products. Here’s a look at everything you need to know.

First off, Microsoft Teams picked up a slew of updates this month. The first of them is the ability to use live transcription with speaker attribution in Teams meetings. The AI-powered feature was first announced in July last year, and it allows organizers and presenters to transcribe everything that the participants speak in a scheduled meeting. It is available for English-speaking users in the United States.

Microsoft has also introduced a new Meeting recap feature in Teams, which allows participants to get a quick overview of important information once the meeting is over. The meeting recap includes a meeting recording, transcript, chat, attached files, and more. External presenter support is now available for Live Events in Teams, and the app now lets organizers manage a live event as a Producer in a separate window.

In addition, Microsoft Teams is rolling out a new Breakout room retention and participant reassignment functionality to desktop users. This means that participants will now remain assigned to their breakout rooms unless the meeting organizer chooses to change them. Furthermore, the organizers can set a time limit for all breakout rooms created in a meeting session. Some of the other features added to Teams in April can be seen below.

Rounding off the features for Teams, the new AI-based polling capabilities are now coming to mobile devices. The company is also launching intelligent poll suggestions, post-meeting insights, and two new poll types, including open text and multiple-choice questions. These updates will become generally available in a couple of weeks.

Lastly, the software gaint has recently unveiled a family of new Modern accessories certified for Teams, including a webcam, a USB-C speaker, and two headsets. There are also some new features for frontline workers and Government customers, which are detailed in the Microsoft Teams blog post.

Next up is Microsoft Word. Last month, Microsoft introduced a new capability in Word for the Web that enables users to automatically convert their Word documents to PowerPoint presentations. The feature leverages the power of AI to include rich content such as images, videos, and icons in the content. The “Export to PowerPoint presentation” feature is now available in Word for the web for all Microsoft 365 subscribers. However, it currently supports the English language only.

Excel on the web is getting a much-anticipated feature that allows file owners to keep track of the changes made to their spreadsheets when collaborating with other colleagues. The “Show Changes” maintains a history of all the revisions made to a workbook for up to 60 days and includes details such as author name, changed values, and the exact location of the change. This update is currently rolling out now to all Microsoft 365 subscribers.

Microsoft Planner, Outlook on the Web, and other updates 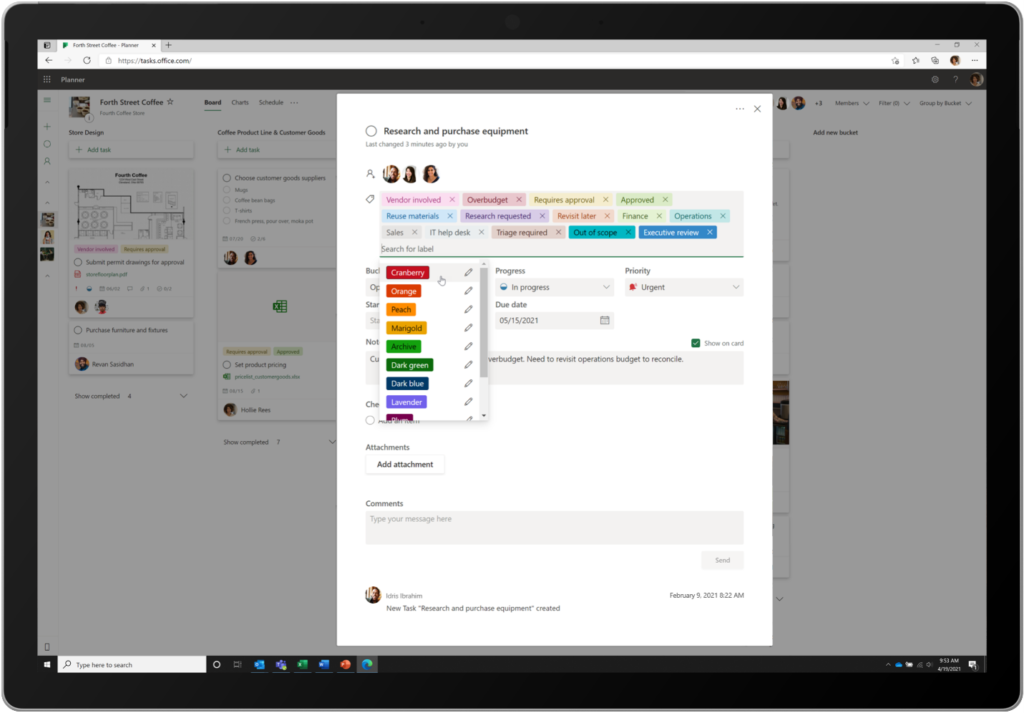 To end the recap, we’ll look at some updates for Microsoft Planner, Outlook, and the other Microsoft 365 apps. Microsoft has increased the number of task labels in its task management tool. Users can now add up to 25 labels in different colors to tasks across all major platforms.

In addition, Outlook on the web is getting a bit of a refreshed design this month. The app is picking up a redesigned left pane that will provide quick access to all the important elements such as contacts, calendar, email, and shortcuts to launch other Microsoft 365 apps. This change should make it easier for users to navigate the app. The company also plans to bring this capability to Outlook for Windows later this year.

Moving on to features aimed at IT professionals. The software gaint has announced some new capabilities for Microsoft Defender for Endpoint to help organizations protect unmanaged devices on their networks. Finally, the Remote Desktop client for macOS has recently received an update that brings native support for the M1 chip, and Microsoft also added support to draw AWS architecture in the Visio desktop app.