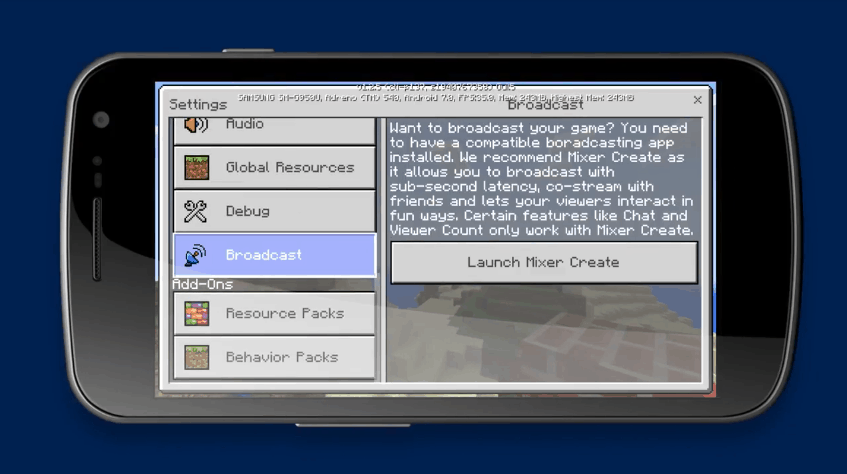 Following the launch of the Mixer Create app on iOS and Android last month, the Mixer team has announced today that Mixer mobile broadcasting will soon be integrated into Minecraft on Android and iOS. The feature is available today in the Minecraft 1.2.5 beta on Android, and it will come to iOS devices when the version 1.2.5 comes out of beta.

On the Mixer blog, Mixer co-founder Matt Salsamendi explained how Mixer interactivity can create unique experiences for both streamers and viewers:

With Mixer Interactivity in Minecraft, any Minecraft command can be turned into an interactive button that viewers can use to change your game. Whether you want to enable viewers to summon a horde of creepers, fill a given area with blocks or just change the weather to rain – it’s all possible. The only limit is your imagination. Plus, with Mixer’s Faster Than Light (FTL) streaming protocol, you’ll be able to watch and play with less than a second of latency.

Here is how to start a Mixer broadcast with Minecraft 1.2.5 beta on Android:

Mixer interactivity in Minecraft is also available today in the Minecraft 1.2.5 beta on Windows 10. “Xbox One will come later this week, and then all versions of Minecraft will get the feature once it exits beta. Also, for Java fans, a separate mod will be coming later this year, as well,” shared Salsamendi.

Spanish doctors are using HoloLens in the operating room, cutting surgery time in half