A new report from live streaming app Streamlabs and game streaming analytics company Stream Hatchet revealed interesting new data about the top streaming platforms this past quarter. The competition between Twitch, YouTube, Facebook, and Mixer has been heating up this past couple of months, and several exclusivity deals have been made to secure top talent.

Despite losing Ninja to Microsoft’s Mixer platform, Amazon’s Twitch continue to sail far ahead of its competitors. According to this new report all platforms saw a significant increase in the number of hours watched from February to March, but Twitch remains in a different league with more than 3 billion hours watched on the platform in Q1 2020 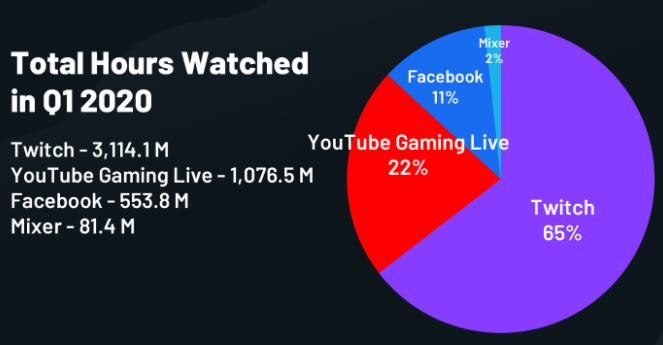 It’s not all bad for Microsoft’s Mixer, as in terms of unique channels the platform was in second position with 4M channels (up 4.1%), behind Twitch with 6M channels. The total of hours streamed also increased by 1.2% compared to the previous quarter. However, the total of hours watched is down 7.3% this quarter to 81.4M (Twitch was above 3 billion), and the average concurrent viewership on the platform is also down 5.3% compared to last quarter.

Overall, this is not very good news for Mixer. Despite the platform attracting more streamers than YouTube and Facebook, the audience is still not there and it looks like bringing top talent like Ninja hasn't helped. Mixer recently revamped its home page on the web and mobile, and also introduced a new viewing experience on Xbox. It's probably too early to see if this will have any impact on viewership, but Microsoft is still committed to Mixer. A leaked video of an internal meeting recently showed Mixer's general manager give an "encouraging" speech to employees, even though recent layoffs apparently led to low morale within the team.