Last Friday, Microsoft accidentally smacked the big red button and released something they weren’t intending. Across PC and mobile devices, Insiders began to see automatic updates for the release of an internal pre-release build. But what exactly was tucked away in these builds? Zac Bowden from Windows Central discovered a working version of the brand new Windows CShell.

In case you didn’t know, CShell (a.k.a. Composable Shell) is Microsoft’s attempt to make a single platform user experience across all devices. From PCs, to phones, to gaming consoles, and more, the Windows CShell is intended to pull everything together into a scalable UI that will seamlessly integrate together flexibly. As Bowden puts it, it is indeed ‘a big deal’. 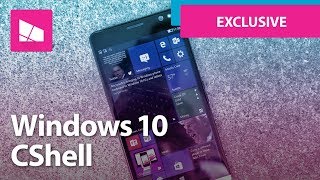 First Look at CShell on a Windows phone (Exclusive)

Last Friday, Microsoft accidentally smacked the big red button and released something they weren't intending. Across PC and mobile devices, Insiders began to see automatic updates for the release of an internal pre-release build. But what exactly was tucked away in these builds? Zac Bowden from Wind

So how does CShell look so far? It’s actually looking pretty good! For a pre-release software, CShell is already functioning as we’d expect it to. Most significantly, the Start Menu is the same experience as it is on the Windows 10 desktop including all the bells and whistles. Context menus, more live tile sizes, turning live tiles on/off for individual apps, and more are now on Windows 10 Mobile with CShell.

Even the Action Center with quick actions and interacting with notifications is now possible. The popularly requested landscape mode on mobile is even possible now in CShell, turning Start tiles on their side and even opening apps straight into landscape mode.

Not only that, but CShell reboots Windows Continuum with a simple but significant change. When hooking up your Windows 10 Phone to a monitor, you’ll be able to take full advantage of this Windows Phone only feature even more with CShell. Multiple apps can be opened in windowed mode on the desktop as if it were running Windows 10 for PC, only powered by your phone.

There’s still more to learn about Windows CShell, and given the pre-release mix-up, it’s fair to say that the update isn’t ready to go live. Speculations indicate that it could be on the back burner to simmer until the next Windows phone, assisting in Microsoft’s push back into the declining mobile market. We’d love to hear what you think so feel free to leave a comment in the section below.