Windows 10 users interested in checking if their PC can run Windows 11 can now download an updated version of Microsoft’s PC Health Check app. The new app was previously available to download for Windows Insiders, but Microsoft has now quietly brought back the installer on the Windows 11 page on microsoft.com (via Windows Latest).

The original version of the PC Health Check app received a lot of criticism at it failed to properly explain to Windows 11 enthusiasts what their Windows 10 PC was missing to enjoy a free upgrade to the new OS. The new version of the app is definitely a step in the right direction, as it can now tell you if your CPU is unsupported for Windows 11, or if you need to turn on Secure Boot or TPM 2.0 in your UEFI settings. 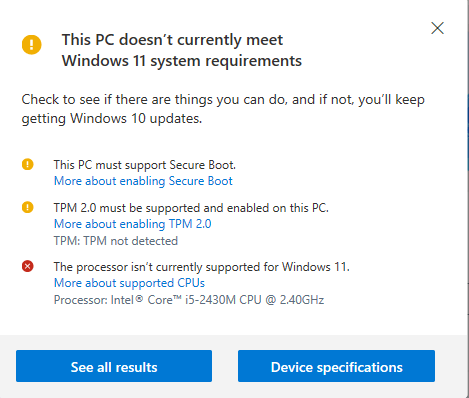 Windows 11 will be the first version of Windows to require a modern 64-bit processor, 4GB of RAM, 64GB of storage, as well as a TPM 2.0 chip and a Secure Boot capable system firmware for security reasons. These minimum system requirements have been quite controversial and will likely leave many Windows 10 PCs on the sideline, though that OS will continue to be supported throughout 2025.

Windows 11 will be officially released on October 5, which is also when the OS will start rolling out on a selection of compatible Windows 10 PCs. The Redmond giant expects the rollout to continue throughout 2022, but PC manufacturers including Microsoft are also getting ready to release new Windows 11 PCs for this fall season. Tomorrow, Microsoft will hold another Surface event where we should see the first Surface devices that will ship with Windows 11, including a new Surface Pro 8.