Despite Microsoft’s procrastination regarding the slip in its development roadmap for its new photo and video editing experience in Photos (formerly know as Story Remix) the Windows team continues to deliver updates to the software for testers ahead of the official Fall Creators Update.

Depending on which Insider ring release testers might be on, new video editing features should be hitting their desktop in the next few days that include many of those jaw-dropping effects demoed during Microsoft’s developer conference back in May.

For the past few months, the Windows team has bounced features back and forth between users on the Skip Ahead, Slow, and Fast Ring release cycles, often times deferring “new” features on the Slow Ring for internal development reasons.

However, starting as early as this past Sunday, the Photos app has been updated with the newest Video editing features many have been clamoring for since Microsoft teased the many months ago. 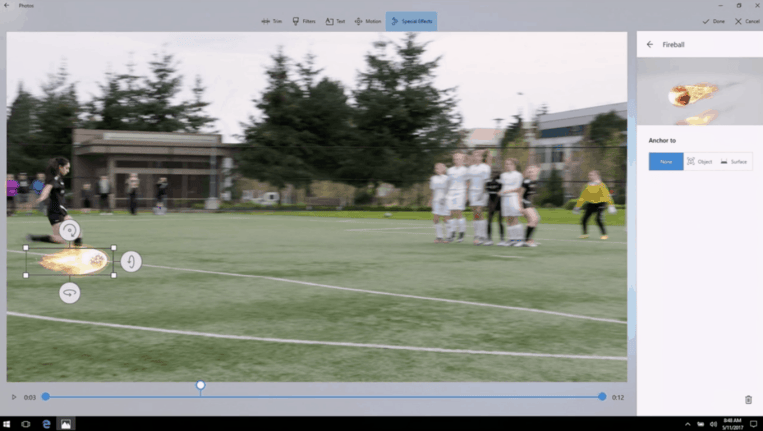 After a quick five minutes playing around with the app, I can anecdotally attest to the ease of use in adding the features to a video thanks to a quick tutorial the app walks users through.

I used a quick couple of videos taken this weekend to test out the new 3D effects and anchoring features, but for those looking to do a bit more work, the app suggests using 2 or more videos to get better results. It should be noted, that a Photos add-on automatically installs itself from the Windows Store when adding the visual effects for the first time.

I’ll need to do a more in-depth testing of the app once I get a chance to upload a collection of photos and videos into an album, but my preliminary experience with the app left me with a positive outlook on the Windows team efforts so far. The layout of Photos editing feature is simple and straightforward and as far as feature richness, it’s akin to the old Window Movie Maker days. Perhaps, in the future, users will gain even more granular editing features, but for now, Microsoft could release this version of the Photos app and be fine.