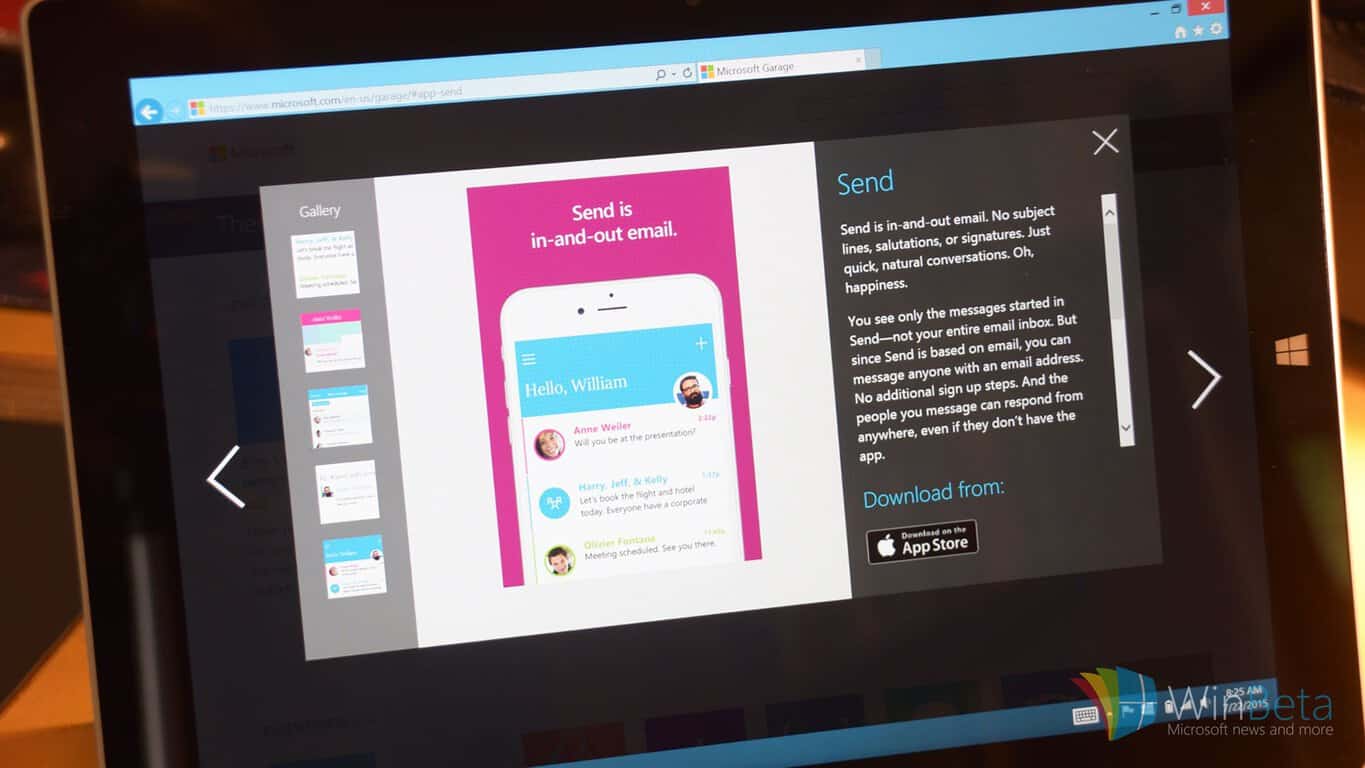 Microsoft has just announced the preview for its Send app on the Android platform, as well as expanding availability of both its iPhone and Android offerings beyond US and Canada onto UK, Brazil, and Denmark. The team behind Send has also closely been monitoring user feedback, and has updated the app with several highly requested features, including the ability to delete conversations, add people to conversations, send direct messages to people from a group conversation, share your location, make a phone call, support for GIF sharing, and more.

Send is lightweight email chat client available for Office 365 business and education subscribers that essentially minifies email into a more instant messaging like experience. It is produced through the Microsoft Garage, and is described as being for “in-and-out email”. Microsoft describes the app’s concept best itself:

While tools like text messaging and IM are great for short messages, you often don’t have your co-worker’s cell phone number or an IM app on your work phone. And we’ve heard loud and clear from people at work, they want all their communications available in Outlook—even if they send them from other apps. This is where Send comes in! Send gives you the simple, quick text message-like experience while allowing you to reach all co-workers and have all of your communications in Outlook for reference later.

While of course this sort of communication can be done on Outlook as well, it can be somewhat cognitively draining to have to prepare something of a formal email just to send out a short message. Send’s usefulness lies in that it’s specifically focused on short form communication and uses its seamless Office 365 integration to make the experience much faster and focused.

It’s also beautiful, featuring a unified, sleek, minimalist and very functional look that’s very pleasing to the eyes. It should also be easy to use. The operating word here is “should”, as I do not have the opportunity to test this app myself. Why not? Because I don’t belong to an organization that uses Office 365. But let’s say I did. I still wouldn’t be able to, because I don’t have an iPhone. Nor do I have an Android phone. I do happen to have a Windows Phone though.

You get where I’m going with this. Although Microsoft has promised a Windows Phone version, as of now it is still nowhere in sight. I suspect Microsoft may be preparing it for the upcoming Windows 10 Mobile platform, which promises to be upgradeable from most Windows Phone 8.1 devices, but some loyal Windows Phone users may still see this immediate lack of first party support rather unsightly. And I don’t blame them.

Click here to read our previous coverage of Microsoft’s Send app. Stay tuned to WinBeta and we’ll update you with that information when it becomes available.