Microsoft’s dual-screen Surface Duo is launching in the US tomorrow, and the company’s first Android device has been years in the making. In a long interview with The Verge, Surface inventor and Microsoft Chief Product Officer Panos Panay revealed a lot of interesting details about the process that led to the creation of Surface Duo, with Microsoft eventually opting for Android instead of a Windows-based OS.

According to Panay, Microsoft started working on a dual-screen mobile device around 2014, after Microsoft cancelled the Surface Mini. At that point, Panay had become pretty much obsessed about creating a dual-screen device, to the point of carrying two pieces of metal connected by a hinge in his pocket for months. The exec did so to get an understanding of how durable such a device would be, and what would be the ideal dimensions for a dual-screen device that should comfortably fit in your pocket.

After Microsoft canceled the Windows RT-powered Surface Mini at the last minute, Panos Panay and his team started working on Andromeda, a Windows-powered dual-screen device which apparently looked quite different from Surface Duo. “At that time, it was different hardware, it’s not the same hardware… it’s not even remotely close,” said Panay. “We’re in so many generations later of development [with Surface Duo], we understand how thin it is, we understand reliability, we understand the robustness of the screens. It has been generationally made, it’s years in the making.”

When designing the Surface Duo, Microsoft ultimately opted for a design where all the internal components would be distributed across both sides of the device, but the company experimented with having all components on one side, and another prototype had the two displays connected wirelessly. There were also some internal debates about LCD vs. OLED screens, and the latter eventually won as they allowed the device to be thinner.

Unfortunately, making the Surface Duo just 4.8mm thin led to some compromises, such as the lack of 5G connectivity, NFC, and a complex camera module. “This is the most emotional product we’ve ever created. A lot of that comes from tension. To get that diamond out, there had to be a lot of it. Microns mattered, not millimeters, microns,” said Panay. “Maybe that’s why it took years to get to this product. There were moments like those because we pushed so many boundaries.”

After Microsoft cancelled the Surface Mini due to Windows RT lacking the apps that consumer want on a tablet, choosing Android for the Surface Duo was a difficult choice, Panay explained. “Bringing Android into the fold, that wasn’t the most simple of conversations all of the time,” admits Panay. “You have to explain that and you want your team on board and people believing it.” Eventually, Microsoft did the right thing as Microsoft was able to work with Google to improve Android for dual-screen devices, and Microsoft didn’t go as far as creating an Android fork like other phone manufacturers have done in the past, some with little success (see Amazon’s Fire phone). 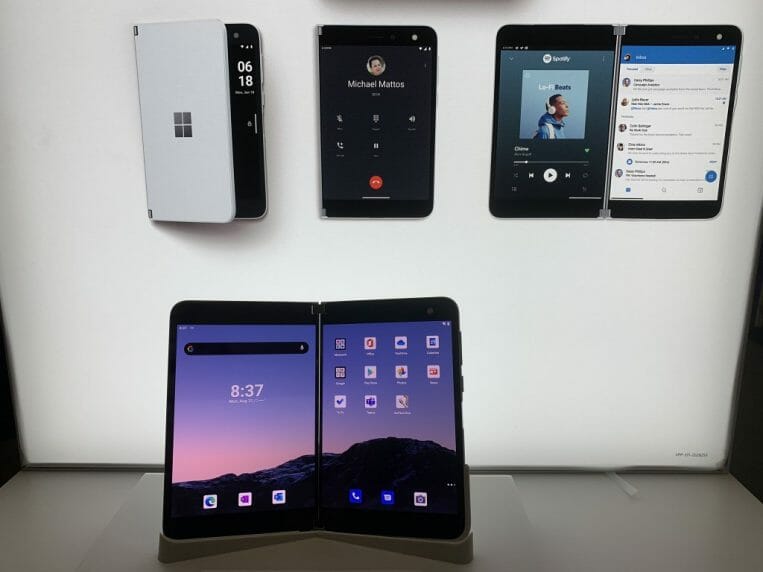 While Microsoft’s Surface Duo will launch tomorrow in the US, we already know that a new version is in the pipeline. The Windows 10X-powered Surface Neo is also still being worked on, though it still has no release date. “I wanted the right time to bring that product with the right experience. We believe in that concept and form factor and size. It will be a beautiful complement to Duo with Windows and I’m excited about it. It’s a product that’s near and dear to my heart.”

The Surface Duo that will start shipping tomorrow will come with two 5.6-inch screens that form a bigger 8.1-inch screen when opened, and the device comes with pretty thick bezels. In the future, Panay hinted that Microsoft could explore different sizes for its Surface Duo and Neo dual-screen devices. “The next natural evolution is different [dual-screen] sizes,” said Panay. “Whether the larger moves into Windows where it’s appropriate to use the Windows codebase and software, and the smaller form factor uses Android, I think you can safely say that’s the right path with what we’re doing right now as a team.”

If we already got the chance to go hands-on with a Surface Duo at a Best Buy store, full reviews should be posted online pretty soon, and stay tuned to OnMSFT for our detailed review of Microsoft’s latest Surface device. In the meantime, we remind you that you can pre-order the Surface Duo from the Microsoft Store, Best Buy, and AT&T.