Microsoft announced a number of key enterprise initiatives at the Convergence EMEA conference in Barcelona, Spain. Dynamics CRM 2016, enhanced Office 365 for business offerings, and PowerApps were all on tap as part of Microsoft’s initiative to “modernize the enterprise.” Over at the Microsoft Blog, the company provided additional details on PowerApps.

Essentially, PowerApps is a new development platform that aims to attack the lack of developers needed to create the enterprise apps that Microsoft customers require. While consumers are worried about the apps that are available in the Apple App Store, Google Play Store, and Windows Store, enterprises need to develop their own apps that tap into corporate data and run on every mobile device their employees carry. Today, that means iPhones, iPads, Android smartphones and tablets, and Windows 10 Mobile devices, and that’s where PowerApps comes in.

Microsoft highlights the key drivers that led to the development of PowerApps:

1) Not enough skilled mobile developers. Gartner predicts, “through 2017, the market demand for mobile app development services will grow at least five times faster than internal IT organization capacity to deliver them.*” There simply aren’t enough skilled developers to keep up with demand for business app scenarios.

2) Business data proliferation. Business data has proliferated spanning on premises systems and beyond the firewall to SaaS clouds. With data stored in many systems, it is difficult to connect to and consume related data from within an app.

3) IT agility and app sharing. Mobile app distribution typically happens through app stores, or through mobile device management, governed by IT. This creates inherent friction in getting apps onto employee phones.

PowerApps should help alleviate each of these concerns by providing tools that allow more enterprise users to create and share apps that work across all of the major platforms. Theoretically, any user who is skilled in Office can create business apps via templates and a visual designer. Professional developers can tap into Azure App Service and utilize advanced data connections and APIs to create even more powerful apps.

Custom apps can be created once to run on iOS, Android, and Windows.

The new toolset has built-in security and connections that allow easy access into SharePoint, SQL Server, Oracel SAP, and custom business systems, along with Office 365, Dynamics CRM, Salesforce, DropBox, OneDrive, and a host of other services. Once developed, PowerApps can be shared across an organization via simple email sharing. 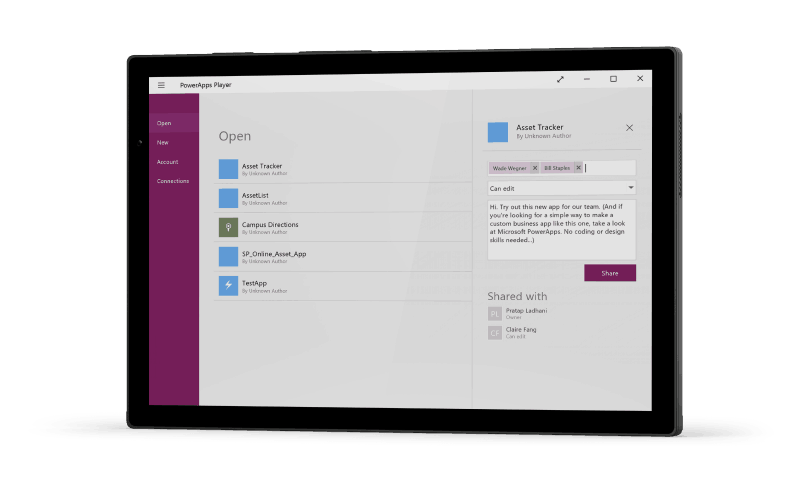 PowerApps can be shared via email just like any Office 365 document.

Microsoft has been working with a number of key customers and partners in developing PowerApps, including Toro, Bose, Metro Banks and eBecs. According to CIO of Division Habitat at Groupe Beneteau, Stéphane Cavallo:

“PowerApps is simple to use, and doesn’t require deep technical knowledge or programming skills. I can create fully-functioning apps very rapidly and easily. In fact, we’ve brought app development in-house, which has really saved us a lot of money.”

Via PowerApps, Microsoft hopes to cement their position among enterprise knowledge workers, making it more and more difficult for competitors like Google to dislodge Microsoft solutions from enterprise customers. The new apps service transitions what was once a Microsoft strength via on-premise solutions into the cloud, and makes them available to every important mobile platform.

PowerApps sccess is limited at the moment, but you can sign up at www.powerapps.com. More information is also available to professional developers on Channel 9. Microsoft is obviously serious about their “cloud-first, mobile-first” strategy, and PowerApps looks to be an integral component.