As we reported, Microsoft’s continued push into cloud computing and storage is reaping dividends. However, not everything is on the rise. While its Intelligent Cloud businesses revenues grew to $5.9 billion on an increase of 8%, Microsoft’s ol' bread and butter, personal computing, is posting declines.
The section housing Windows, Windows 10 Mobile, Surface, etc has dropped 17% year over year despite Windows licensing volume being up 4%. Microsoft’s ‘More Personal Computing’ growth looks to be hampered by continued low phone revenue as well as oddly timed releases of Surface Pro products.
According to Microsoft, the Surface Pro 3’s launch in June of 2014, and its upcoming launch of the Surface Pro 4 had to do with the sharp drop in Surface revenue from almost a billion to roughly $672 million, as people supposedly stopped buying the SP3 in anticipation of an SP4. Those numbers should look better in the upcoming quarters as revenues for the Surface Pro 4 and the Surface Book come online.
On the phone side of things, phone revenues which were down 54% over the year appear to be among the biggest weights on the ‘More Personal Computing’ sector within Microsoft. As Microsoft looks to sure up supply chains by limiting the number of devices manufactured and sold, this strategy may soon turn out to be a positive. Unfortunately, for now, the reality is that devices in this section have revenue declines of 45 percent.
As for the Xbox, it’s a bit of good news/ bad news. Overall, Xbox hardware revenue was down as the company begins to phase out the production and distribution of Xbox 360 consoles. On the bright side, Microsoft’s gaming ambitions grew by 6 percent as the number Xbox Live users grew to 39 million. 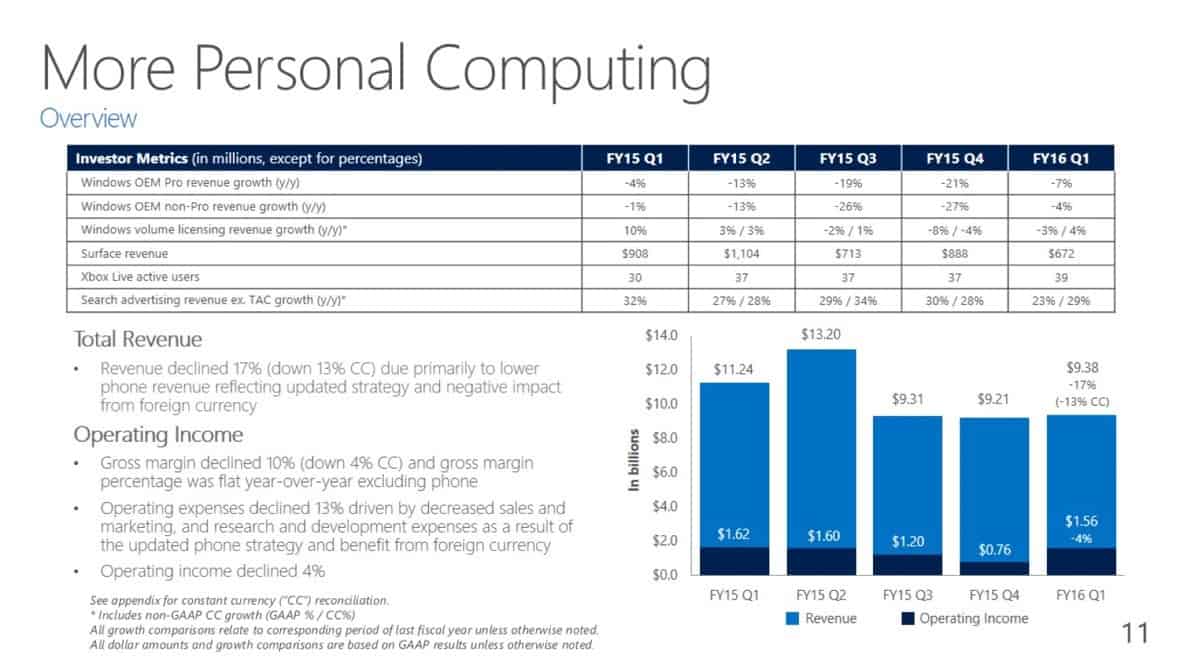 It’s been mentioned that Microsoft is company still in transition, and for the most part that remains true. However, it looks like we’re starting to see a light at the end of the tunnel. Microsoft’s More Personal Computing businesses are becoming smaller, laser focused and aiming for higher profit margins.