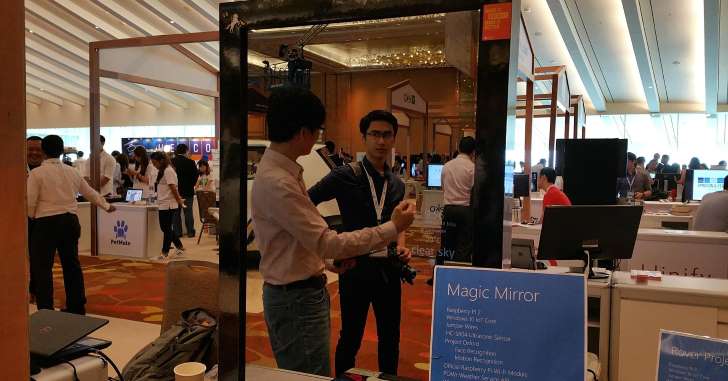 "Mirror, mirror, on the wall...
Can you read me that text again?"

This week, Microsoft went to Singapore to attend  InnovFest Unbound 2016, a week-long conference that showcases digital technology innovations. The series of events started on May 17th and brought in over 3,000 people around the world to catch sight of the newest developments. That's where Izzat Khair, of Microsoft Singapore's developer experience team, showed off the demo version of Microsoft's Magic Mirror.

CNBC International reports that the tech looks and acts just the same as a standard mirror, but with one twist- it is actually what they call a 'smart-mirror.' The invention is capable of facial recognition, identifying who you are and what sort of mood you are in as long as you're looking into it. Not only that, but the Magic Mirror at InnovFestUnbound 2016 was capable of displaying the weather, time, and other small information that might seem useful while getting ready in the morning.

"Imagine when you wake up in the morning, you're able to use the mirror to style your hair, do your makeup, and while doing that, you can also view the weather," Khair explained as he presented the demonstration. It's to be expected that these features would be expanded, allowing Microsoft to look into showing news, social medias, and much more while prepping for the day.

Of course, there could be business potential for the device as well. "Imagine on the monitor of the mirror; you're able to play an advertisement. And you have a camera that can snap a photo of the users that are viewing the advertisement." It leaves some to wonder exactly how safe Microsoft Magic's Mirror could be in regards to protecting an individual's privacy. Khair did assure those attending that the data processed was stored on a private cloud and that it was deleted seven days after.

This isn't the first we've heard of Microsoft using the standard mirror to implement more technology into our daily lives. Could this be the evolution of the "Holoflector" that we saw nearly four years ago? Time will show if the Microsoft Magic Mirror will become a regular household item, or if it will become a tool for commercial advertisement.