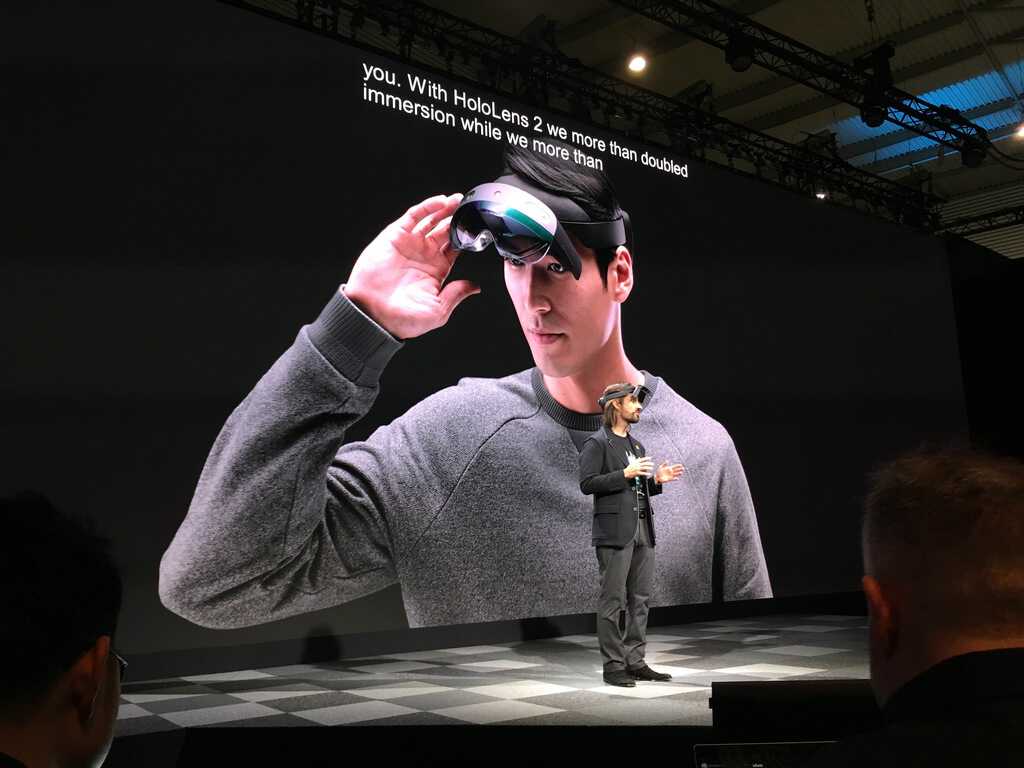 It’s official, Microsoft has just unveiled its HoloLens 2 headset at its MWC press event. Some marketing pictures of the new device leaked earlier today, but HoloLens creator Alex Kipman has just shared all the details about the new mixed reality headset today.

The original version of the HoloLens is now three years old, which is quite an eternity is in the tech world. Because HoloLens still has no true competitors, Microsoft took its time to announce a successor, and the next-gen HoloLens seems to be a much, much better product.

The first-gen HoloLens received some criticism for its narrow field of view, and this is something that Microsoft has apparently paid attention to. Indeed, HoloLens 2 comes with a new depth sensor providing a much wider field of view. HoloLens 2 more than double the field of view while maintainting 47 pixels per degree of sight, and it also with the most power efficient 2K displays according to Microsoft.

Microsoft also spent quite some to explain that HoloLens 2 is a much smarter device that understands where you're looking, adapting the holograms in real time to where you're standing. The new handset supports fullly articulated hand tracking as well as eye tracking, and it's able to recognize your hands and the world around you. Thanks to these new technologies, you'll be able to touch the holograms, rotate them and resize them in real time. The Redmond giant also demoed holographic sliders and buttons to interact with holograms, complete with audio feedback. An impressive holographic piano was also demoed, and this is a use case where 10 finger hand tracking makes complete sense.

HoloLens 2 is all about "instinctual interaction," Microsoft said today, but the company also made the new headset much more comfortable to wear. By changing the center of gravity, Microsoft says that HoloLens 2 literally "floats on your head," making it possible to wear it during hours without feeling any discomfort. HoloLens 2 also comes with a retracable lens, just like what you can find on most Windows Mixed Reality VR headsets.

HoloLens 2 will be available later this year at a price of $3,500, which is a bit more expensive than the $3,000 that Microsoft asked for the first-gen devices. However, it's important to note that Microsoft will be offering bundles including Dynamics 365 Remote Assist starting at $125/month. HoloLens 2 will initially ship in select markets including the US, Japan, China, Germany, Canada, United Kingdom, Ireland, France, Australia and New Zealand, and it's available to pre-order now on this page.