As more and more companies are choosing to run their apps on the public cloud, it seems that Microsoft's Azure is slowly but surely gaining ground on market leader AWS. This is what highlights cloud management company RightScale in its 2017 State of the Cloud Report, a survey of 1,002 IT professionnals across several type of organizations about their adoption of cloud computing (via Fortune). 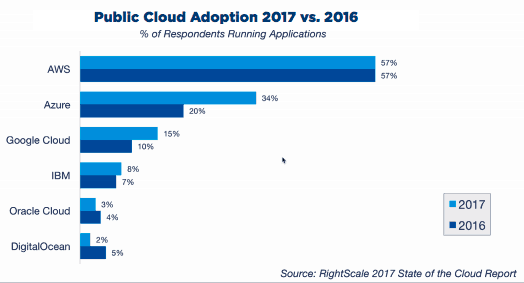 Looking closer at different types of customers, the survey reveals that Azure saw its biggest growth among enterprises (1,000+ employees), where the cloud computing platform saw its adoption rose from 26% to 43% year-over-year. During the same period, 59% of respondents were running applications on AWS (up 3% points) and 15% of them were using the Google Cloud (up 6% points). 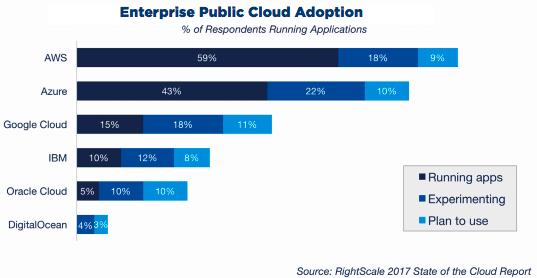 Azure adoption among SMBs was also on the rise, growing from 15 to 25% in January 2017. According to Rightscale, AWS remained in first position even though adoption declined from 58 to 55 percent in the same period. "Public cloud adoption patterns are now largely the same across larger enterprises and smaller organizations," added RightScale.

Overall, the cloud management company is confident that Azure will continue to maintain its steady growth in the near feature. "This year there were a higher percentage of respondents experimenting or planning to use Azure vs. any other cloud," explained the RightScale. "This indicates a potential for Azure to accelerate adoption in future years as the respondents’ experiments and plans come to fruition," the company added.