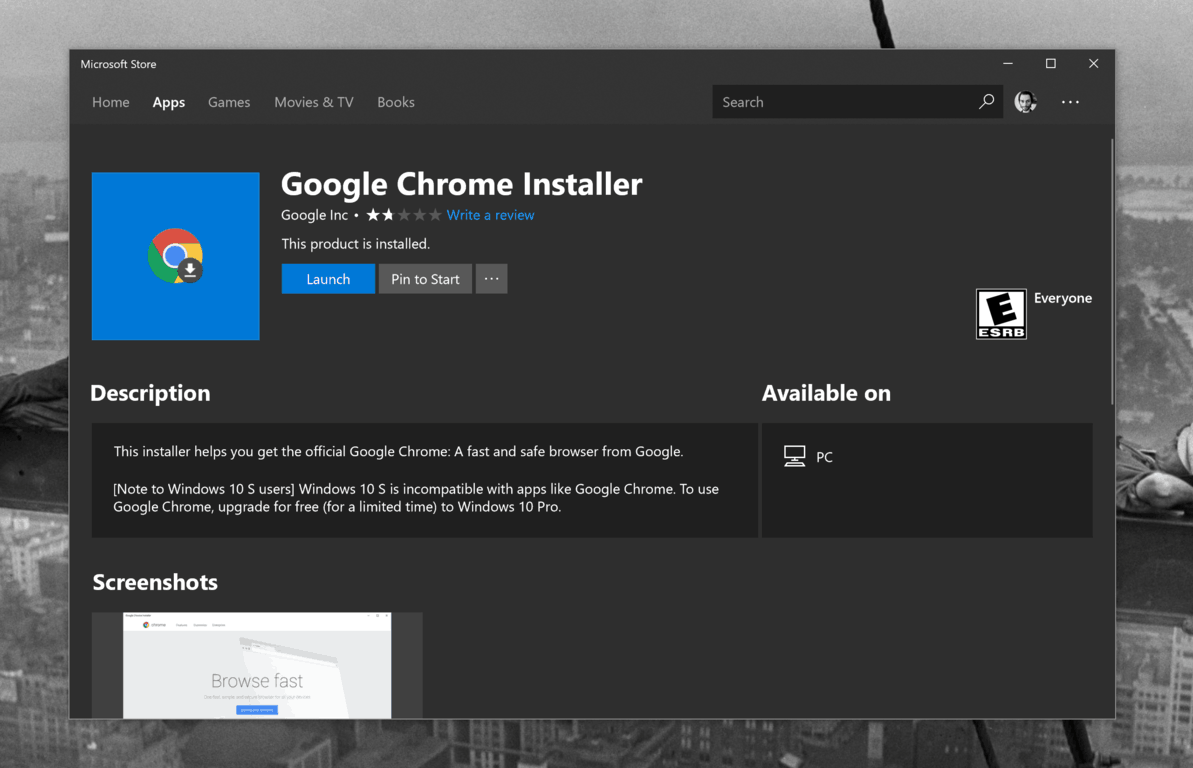 Well, that didn’t last long. It was interesting to see how long Microsoft would wait before stepping in and putting the kibosh on Google’s arguably lazy effort to get more Chrome converts by circumventing the purpose of the Microsoft Store.

A mere twelve hours after the web wrapper hit the Microsoft Store, Store editors are removing the installer tool as the company sees it violating its Store policies. The Microsoft Store policies, as with most apps stores, are pretty basic and look to ensure that users get at least a bare minimum usefulness out of their aggregation.

In a statement given to The Verge, Microsoft cited that Google’s new app had been removed due to its lack of providing users a “unique and distinct value.”

It is doubtful that Google will take Microsoft up on their offer. As of late, it would seem Google is making a sport of skimming the value proposition of unique and distinct experiences for Windows users as the company looks to champion its own growing platform and services portfolio.

To date, Google has developed a single arguably sub-par search app for Windows 8 and Windows 8 phones. That was over five years ago.

Despite a growing audience of 500 million plus, Google has held steadfast in not developing any other of its wildly popular apps for the Microsoft Store or Windows 10 platform, nor updating or supporting its previous search app for Windows 8.

Another speed bump on the road to a friendlier Google/Microsoft app relationship is the platform restrictions in place by the Microsoft Store development requirements. Similar to Apple, Microsoft is strictly enforcing an HTML and JavaScript engine development for any company looking to build and release a browser from the Microsoft Store. The restriction is in place to ensure better performance in Windows 10. Unfortunately, Google uses its Blink rendering engine which is a fork of WebKit, neither of which will run as a new Microsoft Store app at this time.

As many outlets (ours included) rushed to post about the new Google Chrome Installer, I sat back wondering what the big deal was and why a link disguised as a web wrapper was getting so much attention from folks.

This sort of app/customer saga between Microsoft and Google will continue as long both companies vertically compete in the same space. However, despite some rather high profile conflicts in the platform wars, Microsoft and Google are working together to seemingly rid user dependence of apps.

Progressive Web Apps seems to be a position both Google and Microsoft agree upon and could present a two-fold opportunity for Microsoft. PWA’s will help bolster the number of usable and relevant apps in the Microsoft Store as well as transition users to using more of Edge browser for their workloads.

While actions like today help fuel the partisan platform finger pointing, we should all hope that these two push forward with more interoperability and service accessibility to help power the increasing number of devices we use to help manage our daily lives.