Microsoft wants to save the planet with AI for Earth grants, EU Oceans Award - OnMSFT.com Skip to content
We're hedging our bets! You can now follow OnMSFT.com on Mastadon or Tumblr! 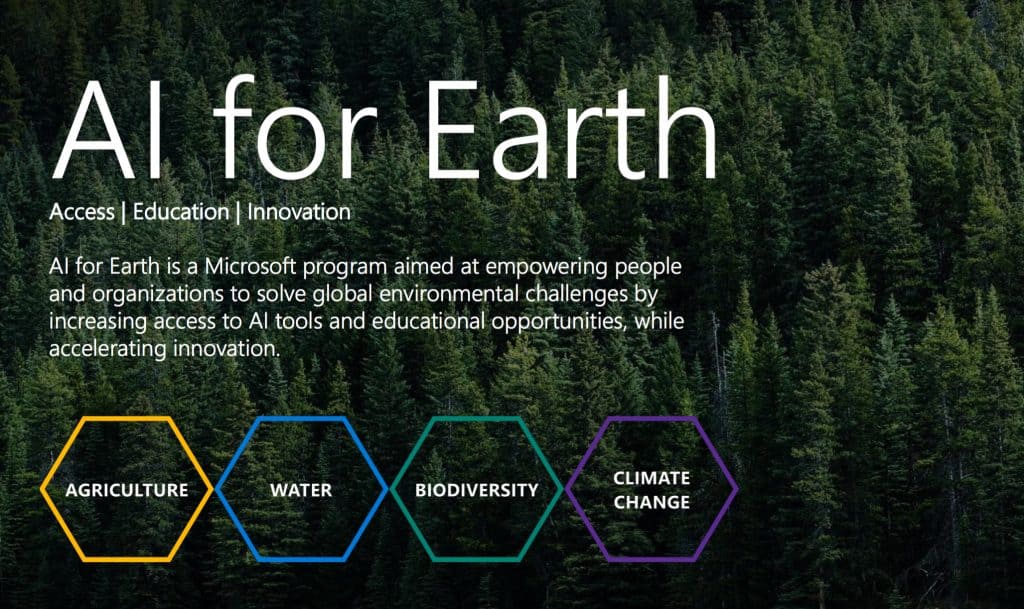 In July 2017, Microsoft launched its AI for Earth grants program to help tackle Earth's biggest environmental issues,including climate change and ways people can deal with the effects on their lives. Since Microsoft's July announcement, the global conservation and enviromental research community has shown an extraordinary interest in Microsoft's AI for Earth grants.

AI for Earth grants were created on the premise that Microsoft could leverage its own AI infrastructure and applications to monitor and assess climate change and how it affects us on a global scale. Today, Microsoft has some important updates on what the AI for Earth program has accomplished thus far.

"20 applicants doing research in 10 countries have now received the first-ever AI for Earth grants. We’ve funded $235,000 in Azure compute resources across the four focus areas of our AI for Earth program—agriculture, water, biodiversity and climate change. These grantees include universities, non-profits and research arms of governments who will now be able to pursue their research, empowered by Microsoft cloud and AI tools."

In addition this announcement, Microsoft is introducing a new grant, a new AI for Earth EU Oceans Award. With the Earth's oceans covering a staggering 70% of the Earth’s surface, oceans play one of the most important roles on the overall health of our planet.
Unfortunately, our oceans are changing because they are becoming increasingly polluted and acidic as a result. Ocean acidity will have a negative effect on our oceans, which some societies rely heavily on for food, and will bring about serious problems in the next century. Here is a video on the issue of ocean acidity and what the University of Washington is doing to deal with this issue in the Puget Sound.

Here is another video where Microsoft Australia is helping an argiculture tech business The Yield. The Yield is using Azure IoT to use sensors, cloud computing, and machine learning to track ocean salinity, temperature, and weather that impacts oyster farmers worldwide.