Earlier this week, Microsoft finally separated Cortana from Windows Search in the latest Windows 10 Insider build, and this change is expected to roll out to all users with the upcoming 19H1 update. This is quite a symbol of Microsoft’s inability to make Cortana a force to be reckoned with, even though the company was the first to ship a digital assistant on a desktop operating system.

The fact is, Cortana hasn’t evolved fast enough to catch up with Amazon’s Alexa and Google Assistant, which both have much better developer and industry support. Microsoft’s CEO Satya Nadella finally admitted the obvious earlier this week during a media event held at the company’s headquarters (via Business Insider).

“Would it be better off, for example, to make Cortana a valuable skill that someone who is using Alexa can call? Or should we try to compete with Alexa? We, quite frankly, decided that we would do the former. Because Cortana needs to be that skill for anyone who is a Microsoft Office 365 subscriber,” Nadella said.

The Cortana/Alexa integration launched in preview in the US last year, and Amazon also made Alexa available as a Microsoft Store app on Windows 10. Now, Satya Nadella said that he also wants Cortana and Google Assistant to talk to each other. “And you should also be able to use [Cortana] on Google Assistant. You should be able to use it on Alexa, just like you use our apps on Android or iOS. So that’s at least how we want to go,” Nadella said during the event. 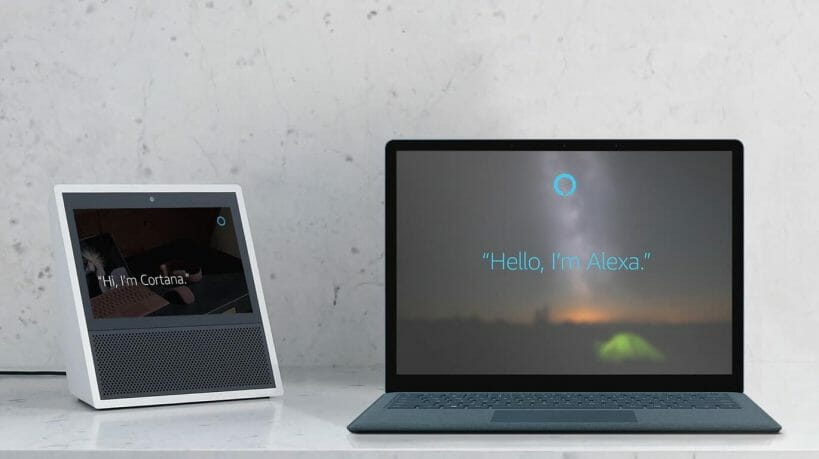 Considering the history between the two companies, it’s pretty hard to imagine Google cooperate with Microsoft, but you never know. As of today, Cortana’s true killer feature is its ability to access Office 365 data like calendar appointments, and getting access to this valuable information should benefit both Alexa and Google Assistant.

Having dropped the ball on connected appliances, Microsoft has no choice but making Cortana a “skill” for other digital assistants. The company never launched its own connected speaker to compete with Amazon and Google’s products, choosing instead to team up with other manufacturers like Harman Kardon or Glas. “We are very mindful of the categories we enter where we can do something unique. A good one is speakers. To me the challenge is, exactly what would we be able to do in that category that is going to be unique?,” Nadella explained during the event.

Microsoft’s CEO is probably right, the company doesn’t need to enter markets where is has little chance to make an impact. It’s now too late for Cortana to become a mainstream digital assistant, but it still remains a valuable asset for Microsoft and a useful tool for people living in the Microsoft ecosystem. However, it remains to be seen if Google will agree to integrate its own Assistant with Cortana. Could the company do it without striking a similar deal with Amazon? Considering that the competition between Alexa and Google Assistant is often seen as the new “platform war,” that would be very surprising.