From the beginning, the Redmond giant has struggled to explain why Windows 11 would improve security for all users, even though many recent devices including the company’s own Surface Studio 2 were left behind. Well, the company has now updated its compatible processor list to allow select PCs using Intel 7th gen processors to upgrade to Windows 11, and that includes the company's Surface Studio 2.

We did identify a set of PC models that meet the principles while running on Intel 7th Gen processors that we did not originally include in our minimum system requirements. Based on those findings, we have expanded the list of compatible 64-bit processors to include the following:

Unfortunately, the first-gen AMD Zen processors still didn’t make the cut after Microsoft did some additional testing with AMD. Except for the aforementioned Intel processors, Microsoft is keeping the same minimum system requirements for Windows 11, which include 4GB of RAM, 64GB of storage, UEFI secure boot, a DirectX12 GPU, and a TPM 2.0 chip.

While today's blog post went into greater detail about how Microsoft chose the minimum specs for Windows 11, the company has also confirmed to The Verge that users with unsupported PCs will also be able to install Windows 11 at their own risk using ISO files. Windows 11 won't be offered via Windows Update on unsupported devices, and Microsoft won't also mention the ISO workaround to install the OS.

Microsoft now tells us that this install workaround is designed primarily for businesses to evaluate Windows 11, and that people can upgrade at their own risk as the company can’t guarantee driver compatibility and overall system reliability. Microsoft won’t be recommending or advertising this method of installing Windows 11 to consumers.

Microsoft is also updating today its PC Health Check app that the company pulled after the initial criticism. "This updated version expands the eligibility check functionality with more complete and improved messaging on eligibility and links to relevant support articles that include potential remediation steps,” the company explained. 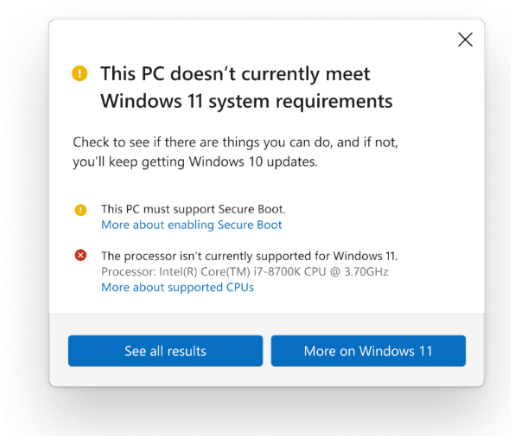 The new version of the app is now available for Windows Insiders, with general availability to follow in the coming weeks. Last but not least, Microsoft will also share more details on the tools IT Pros can use to get their managed PCs ready for Windows 11 when we get closer to the release of the OS later this year. Windows 11 is expected to start rolling out in October, but Microsoft has yet to officially confirm it.