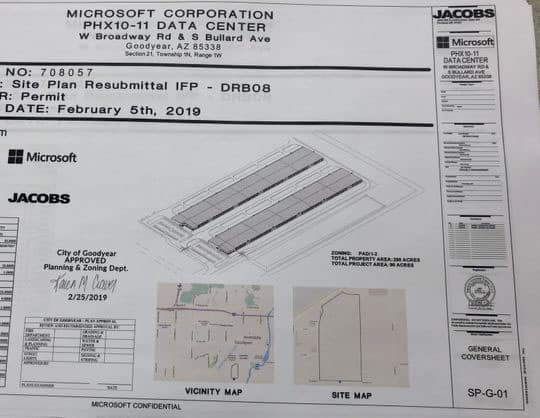 Microsoft is continuing to build out its already massive array of Azure datacenters, and the latest plans include building two new centers in Goodyear, Arizona. According to AZCentral, a USA Today news site (via DataCenterKnowledge), Microsoft purchased one parcel of land near the Phoenix Goodyear Airport last year for $48 million, and just purchased another 147 acres about 10 miles south of the first one for another $37 million. The city of Goodyear had been secretive about plans for the land, providing The Arizona Republic with a largely redacted site plan, but last Friday allowed the news operation to inspect a fully unredacted plan, revealing plans for the Microsoft datacenters.

In addition, Microsoft provided a statement on the acquisitions:

“As part of our plans to support the growing demand for cloud and internet services in Arizona and across the Western United States, Microsoft recently purchased land at two locations in Goodyear, Arizona where we intend to develop world-class data center facilities.”

Microsoft promises that its data center designs “are more energy and water efficient than traditional enterprise data centers,” as water cooling in arid Arizona is a big concern, and AZCentral also raised concerns that datacenters would not bring as many jobs into the area as a manufacturing facility would.

One phase of construction at the airport site is scheduled for a first phase of development for the first of a potential five massive 250,000 square foot buildings.

There’s no word as of yet on when these datacenters will come online, but Microsoft continues to aggressively build out its Azure services.