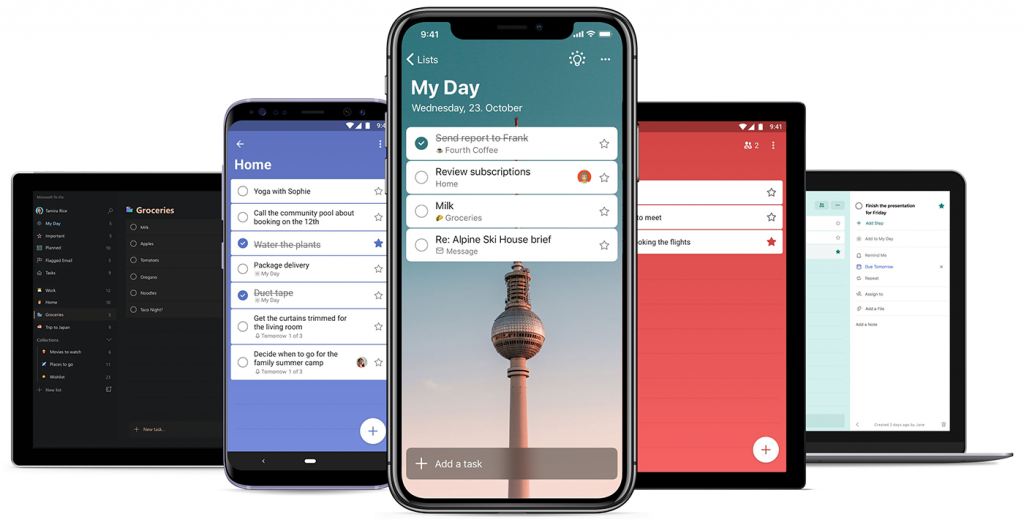 Microsoft To Do, the task manager app that the company launched following the acquisition of Wunderlist is getting a new design across all platforms. The company announced the fresh new look today, emphasizing that it was an important milestone in the transition from Wunderlist to Microsoft To Do.

"We polished the design of To Do by reducing the header size and adding in more color to give the app warmth and personalization. It’s still the simple and elegant app you love, but now with more options to customize, so you can tailor it to suit yourself and your lists. With the new version of To Do, you can choose from a wide range of backgrounds, including the beloved Berlin TV tower that was a feature in Wunderlist. In addition, you can choose a different background for every list”, explained Marcel Käding, Program Manager at Microsoft for Microsoft To Do and Wunderlist.

In recent months, Microsoft To Do has welcomed integrations with many other Microsoft products including Cortana, Outlook, Microsoft Planner, and the Microsoft Launcher on Android. The app supports both personal Microsoft accounts and Office 365 accounts, and it’s available on all platforms including the web and macOS. The app also has smart lists just like Wunderlist, and it also allow users to share lists with friends and colleagues. There's even an option to import tasks from Wunderlist to make the transition completely seamless.

Interestingly, the announcement of this new design for Microsoft To Do follows a very public plea from Wunderlist founder Christian Reber to buy back the app from Microsoft. In a tweet published last week, Reber said that he was ready to buy the app back from Microsoft to prevent the company from sunsetting it.

Still sad @Microsoft wants to shut down @Wunderlist, even though people still love and use it. I’m serious @satyanadella @marcusash, please let me buy it back. Keep the team and focus on @MicrosoftToDo, and no one will be angry for not shutting down @Wunderlist. pic.twitter.com/27mIABncLF

Even though Microsoft To Do has been evolving pretty fast since launch, Wunderlist still has its fans despite the app no longer being in active development. So far, Microsoft hasn't responded to Reber's request, and it would be quite surprising if it does. In the meantime, the redesigned To Do app has now started rolling out across all platforms, and you can get it from the download links below.

Update 7:40 AM PDT: Microsoft reached out to us to mention that the app's name is also being rebranded to "Microsoft To Do," losing its hyphen. The company is still in the process of implementing this change everywhere.