It seems that Microsoft is about to make a big comeback at Mobile World Congress this year. The company has just sent media invites for a press conference today, informing the press that CEO Satya Nadella, HoloLens inventor Alex Kipman and CVP of Azure Julia While will make the trip to Barcelona this year (via ZDNet). The company’s press conference will be on Sunday, February 24th at 5PM CET (8AM PST). 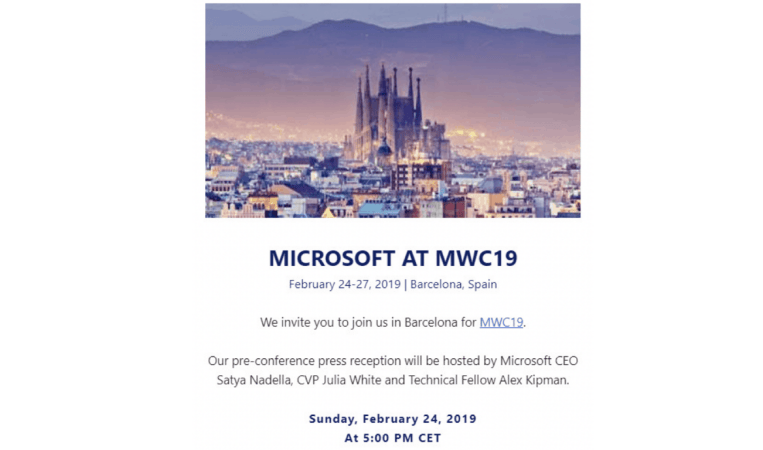 The last time the Redmond giant had a significant presence at MWC was in 2016, where some of the last Windows phones were announced including Microsoft’s Lumia 650 and the HP Elite x3 . As you know, Microsoft is no longer in the phone business, but the presence of Alex Kipman suggests that Microsoft’s attendance could be HoloLens-related. Unfortunately, it doesn’t seem that Surface boss Panos Panay will also be there, so probably best not to expect any “Surface phone” news. However, we could well see some new Windows 10 on ARM PCs being announced during the event.

The dedicated MWC page on Microsoft’s website doesn’t really go into specifics beyond the usual “intelligent cloud and intelligent edge” talk. However, the company says that it will help attendees “transform spatial understanding through advanced sensors and AI at the edge to make technology more personal and natural.”

We learned from various reports that Microsoft is expected to launch a next-gen HoloLens headset this year, and the device will reportedly come with a Qualcomm ARM processor, a new depth sensor as well as a dedicated AI chip. The new headset may also ship with Windows Core OS, the modular version of Windows 10 that Microsoft is developing for various new form factors.