Microsoft is testing a new Cortana helper and a new Cortana bot in the Skype Preview apps on Windows 10, iOS, and Android, according to Windows Central. With the Cortana Bot, Cortana will appear in the user’s contacts list, allowing the user to chat with the bot and complete weather, navigation, and other tasks. And, with the Cortana helper, Cortana can be added to a chat and can suggest pre-programmed responses to a conversation.

We were not able to find the Cortana bot or Cortana helper integrations on our versions of Skype Preview, but the report indicated that Cortana can be added to any conversation by pressing the “+” button and scrolling to the left. Users can also find and chat directly with the Cortana bot by searching in the bot directory for “Cortana.” 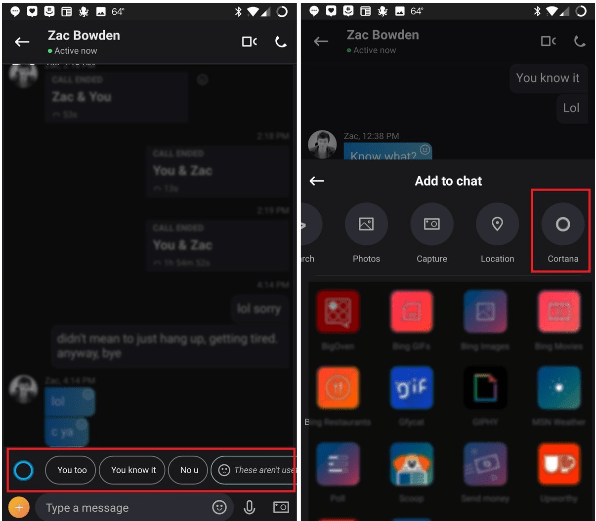 Again, at this time, the Cortana bot and Cortana helper are only available in the Skype Preview apps on Windows 10, iOS, and Android. It’s also very limited, as it would appear as though Cortana on Skype will not integrate with your Cortana Notebook, thus having no access to your personal information.

It’s great to see that Microsoft is taking Cortana out of its Windows 10 Shell and integrating artificial intelligence into Skype. The company may be planning a wider release of this feature in the future, so it’s best to keep tuned for more information.