Microsoft Teams users and first-line workers on Android with company-managed devices have been enjoying a Walkie Talkie feature since last year, but it is now coming to iOS, too. That’s according to a new listing in the Microsoft 365 roadmap which indicates it is now in development for a release in June CY2021.

Just like how it works on Android, the feature will likely be integrated directly into Teams via a button in the bottom bar of the app. If enabled by IT Admins, it will enable Teams users on iPhones to securely broadcast messages to each other through Wi-Fi or cellular networks. Microsoft specifically says this feature will “teams to communicate instantly and always stay on the same page.” 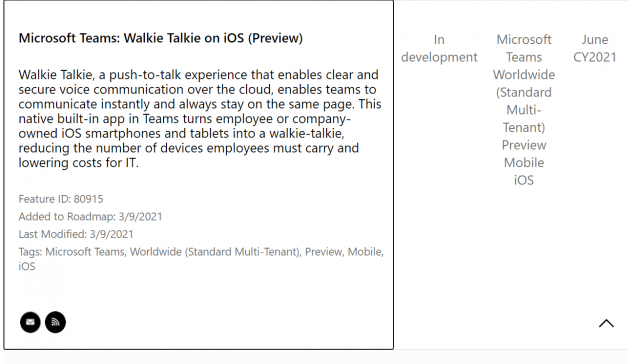 It’s great to see this feature make the jump across from Android to iOS, as Apple’s iPhones are quite popular in enterprise scenarios, too. Apple already has a similar feature on the Apple Watch, too, but Microsoft’s solution doesn’t require any other hardware. Microsoft says it can reduce the number of devices an employee has to carry, and lower costs for IT admins.