Microsoft had the most talked about conference of E3 2016

One of the most-popular conversations around E3 is always, “Which company had the best conference?” and now, thanks to technology, there may be a definitive answer. Well, as far as social media popularity goes anyway.

The people over at Brandwatch analysed social media activity during and after each E3 conference this year from EA, Bethesda, Microsoft, Sony, Ubisoft, and Nintendo (even though Nintendo’s wasn’t really an official E3 presentation) and it looks like Microsoft was the biggest hit, garnering 30% of social media mentions. 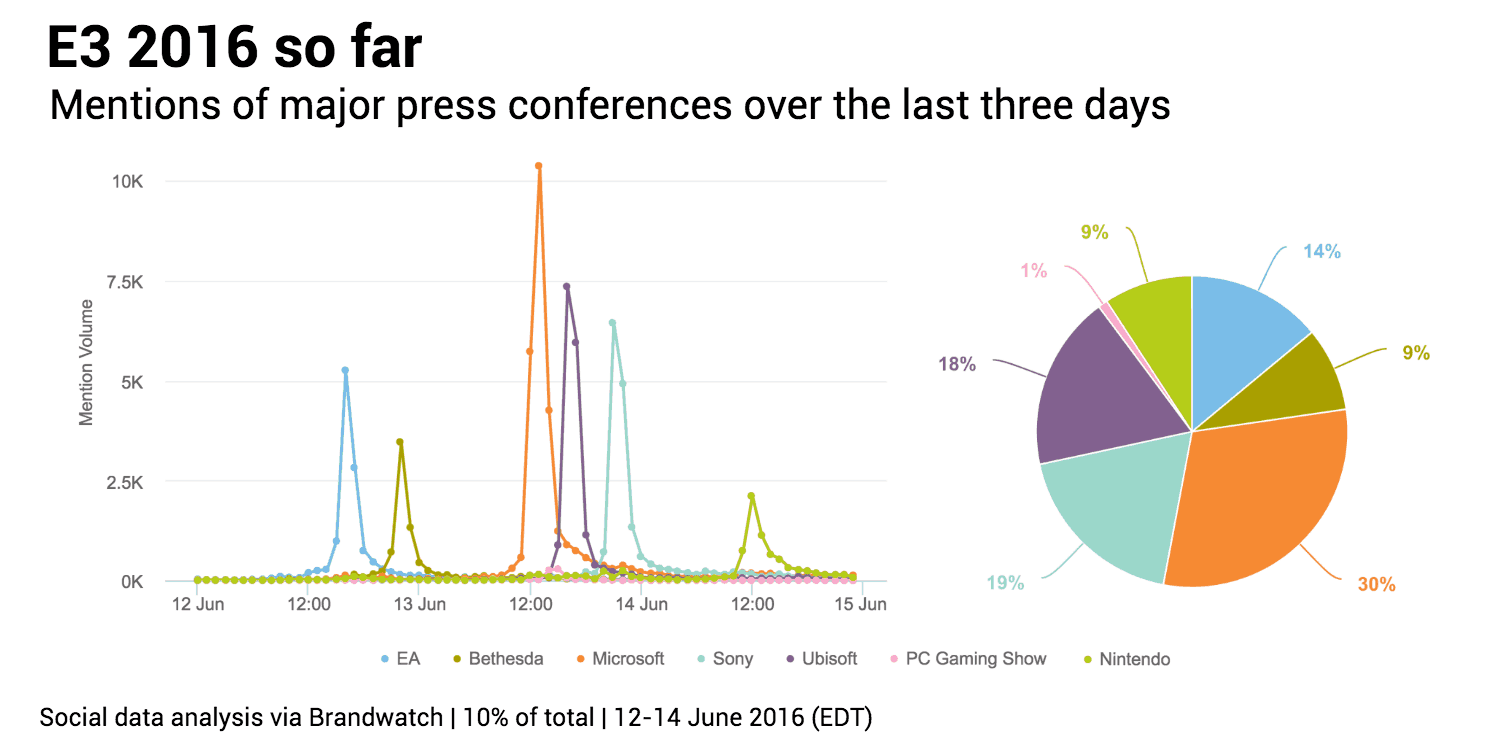 Brandwatch: Most talked about companies at E3 2016

Sony came second with 19% of the mentions while Ubisoft received 18%, EA got 14%, and Bethesda and Nintendo tied with 9% each. The PC Gaming Show was super popular and earned just 1% of social media activity.

When it came to which specific parts of Microsoft’s conference were appreciated by fans the most, the most talked about moment occurred after the announcement of Project Scorpio with the Wireless Controller Design being the second most popular moment and the video game, We Happy Few, coming in third. This was particularly impressive as We Happy Few is essentially a small indie title yet it still beat the big reveals of Dead Rising 4 (which came in a close fourth), ReCore, and Sea of Thieves. 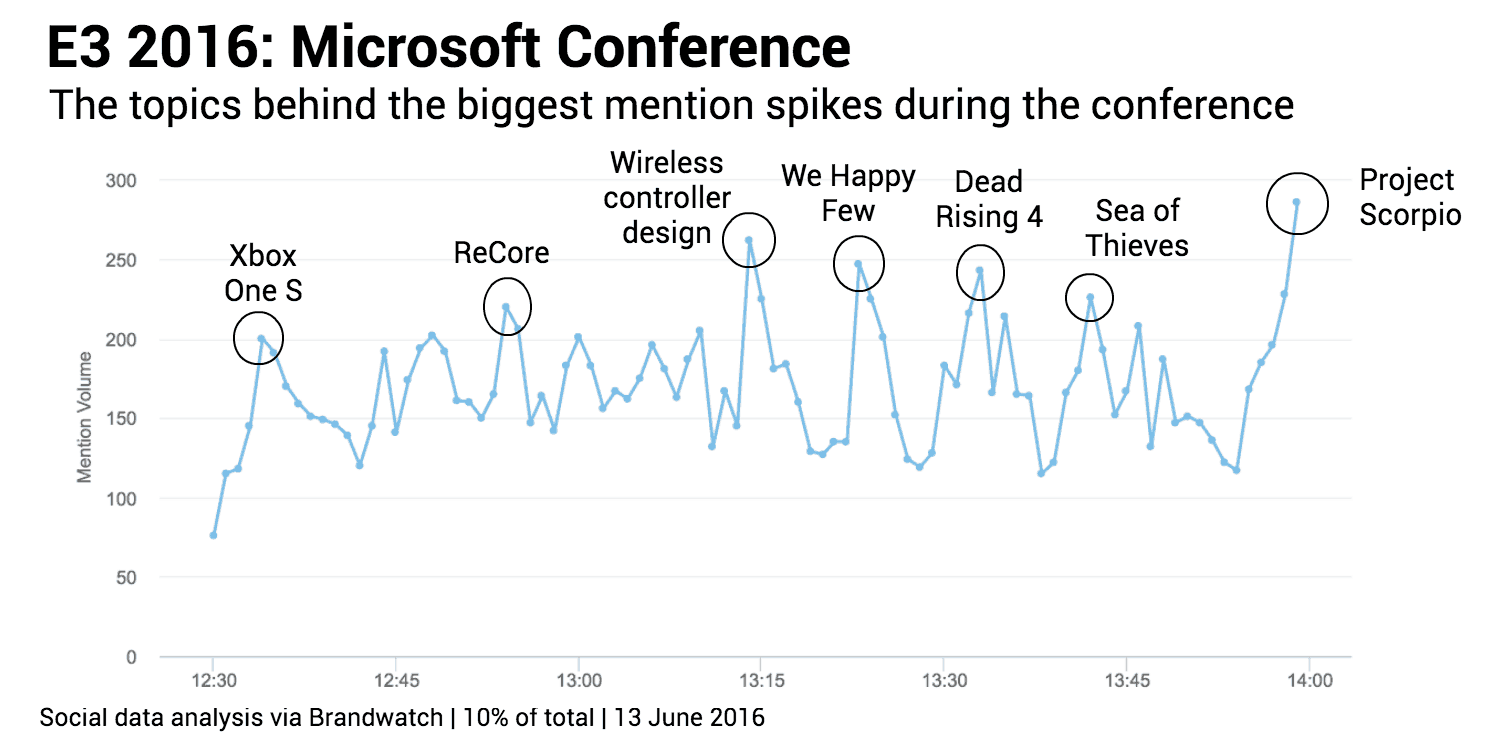 Interestingly, while We Happy Few was one of the most generally discussed moments throughout the conference, according to a second chart in the report, when it came down to video game mentions, Forza Horizon 3 was more popular, followed by Gears of War 4, and then We Happy Few and Dead Rising 4 tying third. It’s a little ambiguous as to how these two results are different from each other but these are the statistics provided.

A separate chart that displays the popularity of games discussed on social media throughout the entire three day event shows an even more different story with We Happy Few dropping significantly in popularity. Overall, Nintendo’s new Legend of Zelda game was the most popular game of E3 but several games launching on Microsoft’s Xbox One consoles continued to rank highly with Battlefield 1, Watch Dogs 2, Star Wars Battlefront (there was news of DLC for the current version and plans for a sequel), South Park: Fractured But Whole, and Titanfall 2 all getting top positions. 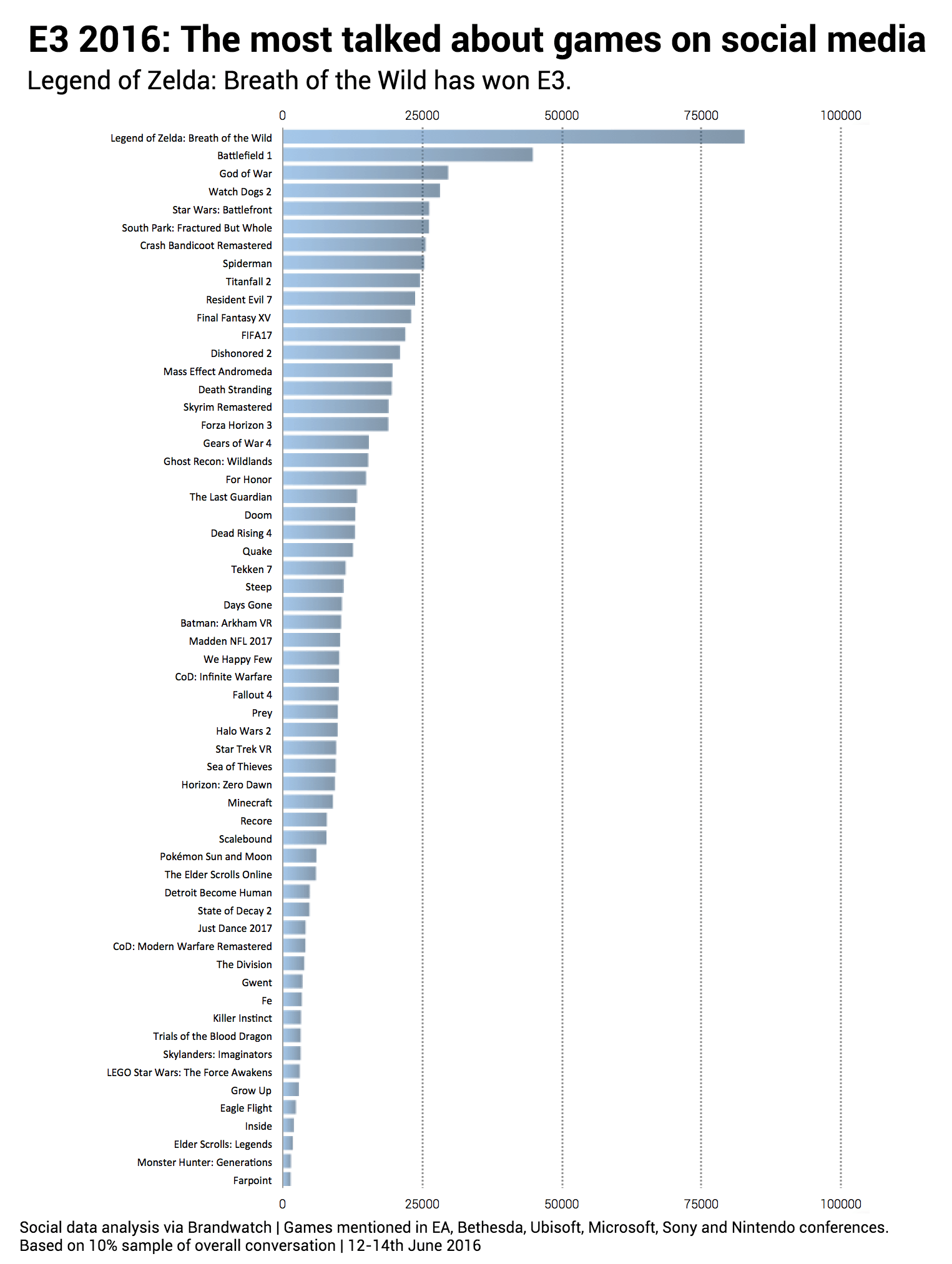 Brandwatch: Most talked about games at E3 2016

Do you agree with these results? What were your favorite moments of E3 2016? Let us know in the comments down below.