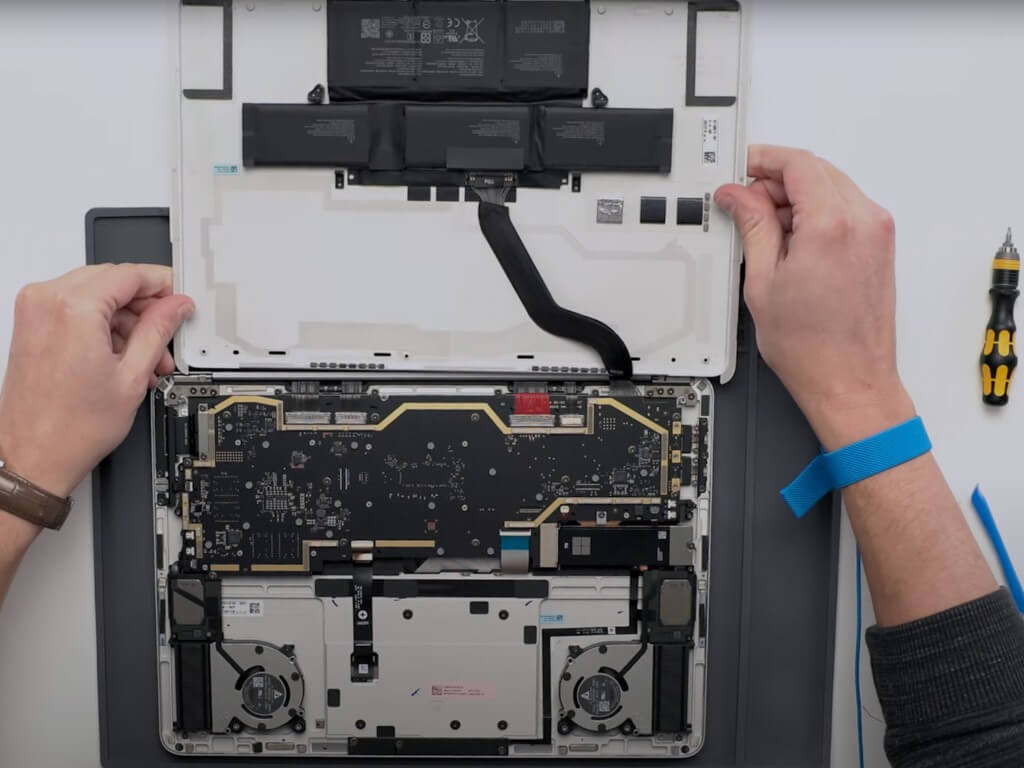 In a video published to the Microsoft Surface YouTube channel, Microsoft is showcasing the repairability of the Surface Laptop Studio. The 14-minute long high-level demonstration takes you through a full teardown of the device and highlights some of the components that can be replaced with minimum tools.

Of course, Microsoft does warn that you seek professional assistance for device repairs, and seek caution when doing any of this on your own, but the video is pretty interesting for do-it-yourself fixers with experience. The tools needed include a spudger, tweezers, and Torx plus screwdrivers with a 3IP and a 6IP tip. An anti-static wrist strap is even recommended, to avoid frying internal components. Microsoft also mentions that guides are available in service guides on the Microsoft Support website.

Thanks to this video, can see that to get into the guts of the Laptop Studio, you need to first tear off the rubber feet as well as the cosmetic tape surrounding the bottom lip of the device. This will then give access to seven screws, and two screws on the brim. With those removed, you'll then be able to pull out the backplate, and get access to the SSD for replacement and also shutting down the power (with just two screws) or removing the battery cable and then the battery.

With the backplate and SSD removed, Microsoft goes a bit further to point out the repairability of the device beyond just those components. According to Colin Ravenscroft, who is doing the disassembly, the fans, motherboard, and display module are all removable without hidden adhesive or glues. "We really wanted to make sure that we focusing on doing the right size repair, and get you up and running as soon as possible," said Ravenscroft, the senior DFX Engineer, Design for Repair, at Microsoft.

The repair video goes on to show the process of replacing the display module (4:50 mark) the Surface Connect port, and the audio jack (7:04 mark,) the fans (8:43 mark) subwoofers (9:51 mark.) Even the motherboard is removed (10:47,) as well as the thermal module (11:43,) revealing that Microsoft has visual guidance (via stickers) on where screws might be covered up. Microsoft then ends the video by mentioning by mentioning that during reassembly, removing the SSD puts it into repair mode, so the device will not power on until a charger is connected.

It's really great to see that a lot of the components in the Surface Laptop Studio are replaceable, but it's also quite a shame that to get into the device, users need to replace both rubber feet and cosmetic tape. If not careful, these can be damaged, and make the Laptop Studio quite ugly when put back together.

At any rate, this is a huge win for repairability. Microsoft said in October 2021 that a third-party organization would study the environmental and social impacts of increasing consumers’ options to repair their devices. It also teamed up with iFixit on Surface repair tools for authorized technicians, making device repairs quicker and more efficient. The new Surface Laptop SE in education is also quite a repairable device, mainly made of plastic.

Fans are frustrated with continued Halo: Infinite delays as 2022 roadmap is released