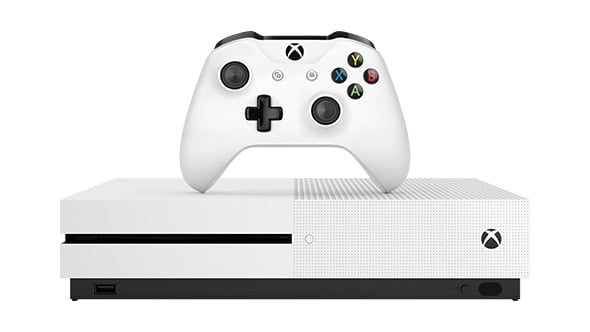 Today was a good day for Xbox One fans, with Microsoft revealing a ton of new and exciting news at the company’s E3 event. Some of the games revealed for the platform won’t be coming until later this year (or even 2017), and the new mega-console, the Xbox Project Scorpio, won’t be coming until the holidays, 2017. If you’re looking for something you can get your hands on sooner, then the Xbox One S just might be for you.

Coming in August, the Xbox One S is slimmer, sleeker, and 40% smaller than the current Xbox One. The power supply is integrated in the unit, and so no more unsightly power brick to contend with. And it has an IR blaster. And even given all of the upgrades, the Xbox One S will be coming in at an also-svelte $299–but that’s only a starting point, of course.

One of the other notable features is the availability of 2TB of storage, dramatically increasing the game storage for those of you who like to play and play and play. However, all of that extra space comes at a premium, specifically an extra $100 if the Launch Edition that’s listed at the Microsoft Store for pre-order is any indication.

As you can see, there’s no specific shipping date specified, but again, we’re likely looking at an August timeframe. That’s not too long from now, and so if you’re an Xbox One fan you might want to get your credit card out and get this thing on order. The sooner, the better, you know?