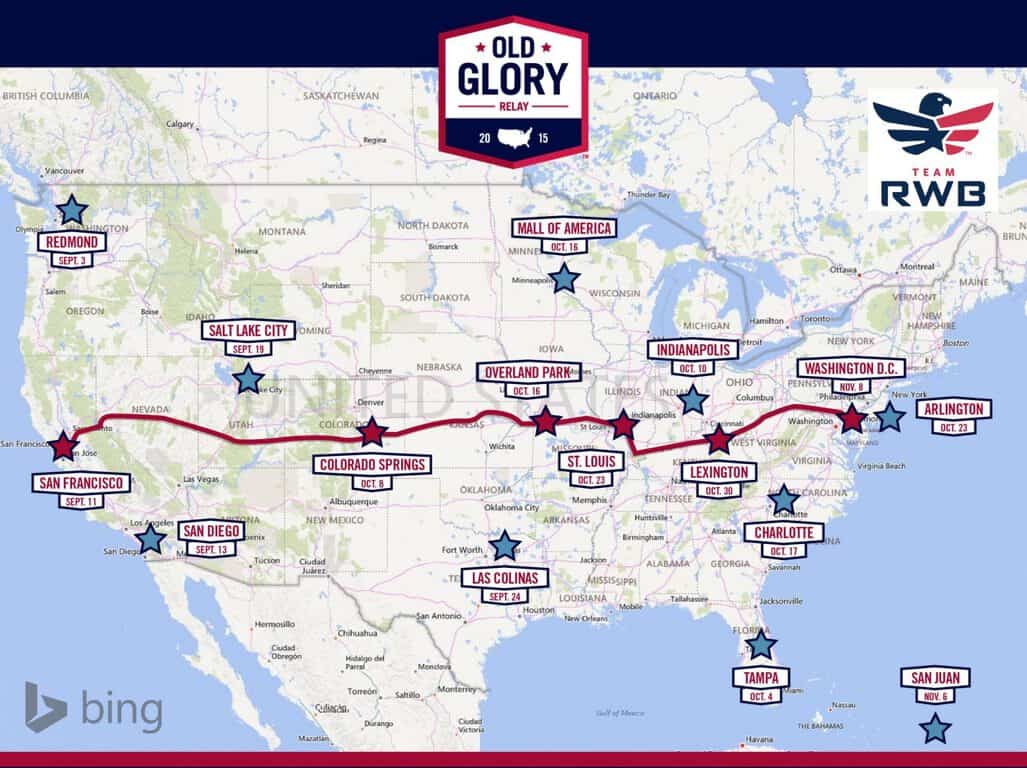 One of the founders of Microsoft, Bill Gates, now runs the “The Bill and Melinda Gates Foundation” which helps those less fortunate than the rest of us. Perhaps inspired by its founder, Microsoft itself is involved in many philanthropic events. Recently the company hosted festivities for the Special Olympic “Flame of Hope” relay and now it is sponsoring the “Old Glory” relay to celebrate US war veterans. Microsoft partners up with relay organisers, Team Red White and Blue, who set up the relay to “enrich the lives of America’s veterans by connecting them to their community through physical and social activity”.

This year’s relay kicked off on Sept. 11 (the anniversary of 9/11) in San Francisco and will end 60 days later in Washington D.C. on Nov. 8. Throughout that time, Microsoft runners and veterans will carry the Old Glory flag 3,540 miles across America along the route shown in the image above.

On the first two days Sean Kelley, program director for Military Affairs at Microsoft, ran 27 miles with onlookers honking car horns and giving him claps of encouragement. It was a proud moment for him:

“SEMPER FI!” I could hear shouted from the doorway of an office building. One young man stood at attention as we passed. Another older man, with a black beret on, saluted us proudly.

Apparently the Microsoft runners even ran the final sprint to the Microsoft campus with the Google veterans which shows that business rivalry was left at home and veterans are the only focus.

This isn’t Microsofts first involvement with veterans as previously they launched an assistance program to help veterans get into tech jobs. Unfortunately after their military service is done, many veterans become unemployed because they aren’t sure where to apply their skills.

We salute Microsofts efforts to help enrich the lives of veterans. War, while sometimes necessary, is a terrible experience for any human to go through. Hopefully Microsoft will inspire others to support these brave men and women.