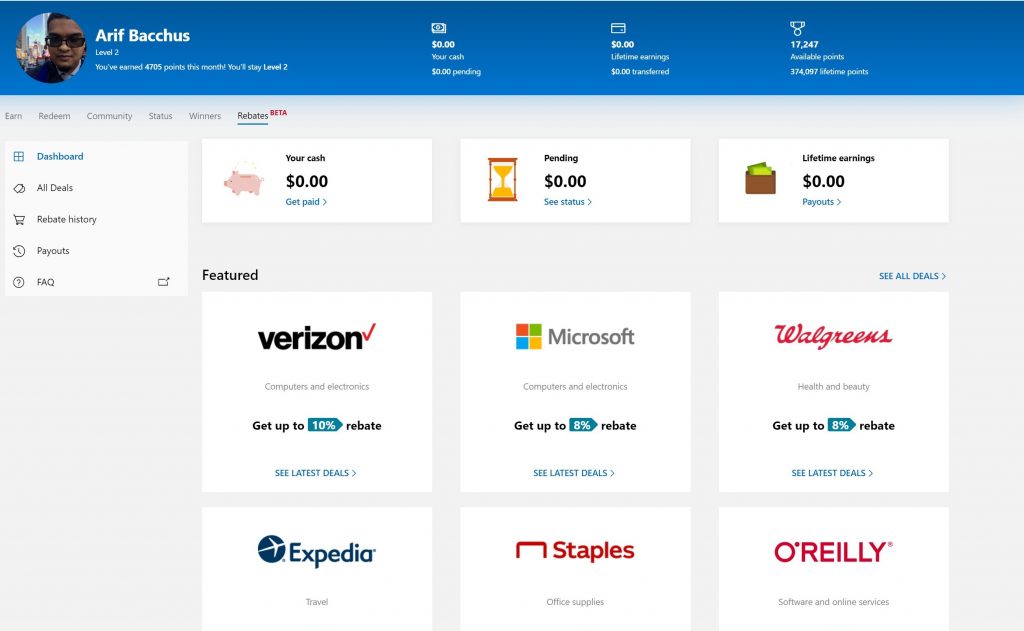 Microsoft Rewards has always been a great way to redeem points towards Microsoft Giftcards and other cool things. However, it would now appear as though Microsoft is now beta testing a new feature for the program which would bring it to a new level. Indeed, select Microsoft Rewards members now have access to a "Bing Rebates" feature, allowing them to earn discounts when they shop with participating retailers through Bing.

Currently, it appears as though only a few Microsoft Rewards members have access to this feature, and we just so happen to be one of the lucky few. If it is available to you, it will appear on the Microsoft Rewards Dashboard as "Rebates Beta." It's also a feature that is only available here in the United States.

Clicking this section shows some featured and other retailers participating in the program. Eligible Microsoft Rewards members will be able to get a certain percentage of a rebate at each of these retailers. As an example, you can currently save $10 on Office 365 years purchases, $5 on Office 365 monthly purchases, and 8% on Surface products or accessories at the Microsoft Store. Other retailers that are participating in the program might also show up on Bing with an "Up to X%" rebate tag.

It's important to note that there are a few conditions for this program. You will need to be signed into Bing with your Microsoft Account when shopping. You also need to click and complete your purchase through the links on the Microsoft Rewards dashboard, or via Bing first. You'll the eventually have the savings transferred into your Microsoft Rewards and then PayPal account after a waiting period. Microsoft Explains:

"To make a purchase, click through to the retailer's website from Bing, then shop as you normally would. You should complete your purchase in a single browsing session without leaving the retailer's site or using a coupon code. After you complete your purchase the rebate will be credited to your Rewards account. After the waiting period has elapsed, you can transfer rebates to your PayPal account."

You'll be able to check the status of your rebates from the Rebates section of the Microsoft Rewards Dashboard in the meantime. There are three sections, "Your Cash" to see how much you were paid out, "Pending" to see your status, as well as "Lifetime earnings" to see the final earnings you've made.

Retailers will have the right to decide which purchases are eligible for these rebates, so it's best to be careful. Microsoft also has a limit of $1,000 per yeat from Bing Rebates, but you can contact support and tell them your reasoning for a higher cap.

It would appear as though this program is similar to the old "Microsoft Earn" program, which was discontinued a while back. That had allowed participants to earn credits toward purchases at the Microsoft Store by spending at a variety of other retail outlets and restaurants.

Best "on the go" accessories for Surface and more