If you know what snafu stands for, then yup, this is a snafu. Over the weekend, we received some tips that OneDrive users, who had been using SD cards or external drives formatted in another filesystem protocol were now requiring NTFS: 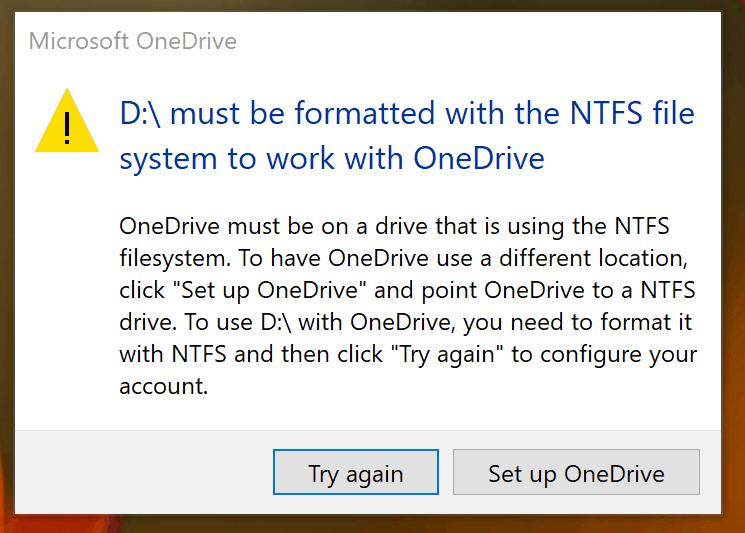 A number of commenters on our initial post had been using non-NTFS drives, for whatever reason, for some time, and were confused and upset that they suddenly had lost access to their OneDrive files. We asked Microsoft for comment, and although the 4th of July holiday slowed things down a bit, Microsoft emailed today to offer an explanation:

“Microsoft OneDrive wants to ensure users have the best possible sync experience on Windows, which is why OneDrive maintains the industry standard of support for NTFS. Microsoft discovered a warning message that should have existed was missing when a user attempted to store their OneDrive folder on a non-NTFS filesystem – which was immediately remedied. Nothing has changed in terms of official support and all OneDrive folders will continue to need to be located on a drive with the NTFS filesystem.”

In this doozy of a statement, Microsoft admits they've been missing (for years?) a warning message and "immediately remedied" the problem (without warning or announcement!!). They contend that "nothing has changed in terms of official support," when every affected OneDrive user knows full well that a lot has changed. It's just an incredible statement, for a lot of reasons.

In looking through this OneDrive documentation, we can't find anything mentioning NTFS, and a search on Microsoft.com for "OneDrive NTFS" only brings up multiple complaints about the recent changes. While, according to Microsoft, non-NTFS filesystems aren't officially supported, those systems have worked just fine until just this past week.

I tested my Surface Pro 4 again, to see if there was a workaround I was missing, but it's now apparently impossible to use anything but NTFS with OneDrive.

There are a couple of ways to get OneDrive working again. I just formatted the drive to NTFS, and set up OneDrive from scratch, using the D: drive (an SD card) as the OneDrive location. OneDrive then re-synced all my files and was ready to go again in an hour or so. Our How To post on setting up OneDrive goes into all the details.

If you're using ExFAT or ReFS, you're going to have to reformat your drive, but if you're using a FAT drive, you can use the "convert" command by opening up a command line and running "convert <drive letter>: /fs:ntfs" (no quotes). This will convert the drive to NTFS without losing any data, although it's probably far more likely you're using ExFAT.

We're going to respond back to Microsoft's response, to see if we can clarify the clarification, but the short answer is that OneDrive now requires NTFS. Situation normal, and all that.

How to set up OneDrive on Windows 10

Microsoft to offer live stream of its Research Faculty Summit, focus on AI