Microsoft Research is a team of 1,000 engineers using artificial intelligence and machine learning tricks to work on awesome projects like predicting the future, real-time language translation or improving racing abilities . According to a new report from Tech Times, Microsoft engineers helped ESPN build their latest Top 100 All-Time NBA rankings which were released two weeks ago.

Sports rankings can either be generated via old-school brainstorming or through computer algorithms, but as ESPN wanted to mix both kinds of inputs, the sports media conglomerate partnered with Microsoft Research to help them collect data and aggregate it with a human touch.

The first step of this project was to ask a panel of basketball experts to come up with a list of the greatest 150 players in NBA history. Then, Microsoft engineers used that first human input to create its PredictWise Surveys tool which is a comparison engine that matches the best players of all time against each other. ESPN Director of content analytics Royce Webb explained to Tech Times the early stages of the process:

“We needed the players to make sense, so the players had to be fairly close to each other in quality, but they had far enough apart that the ballot would then generate meaningful results later on, so they had to really tweak, tweak, tweak, with back-and-forth testing to where they created the unique ballot, which, as far as I know, is unlike any ballot that ever existed,” us about the and using the comparison engine’s matchup generator. 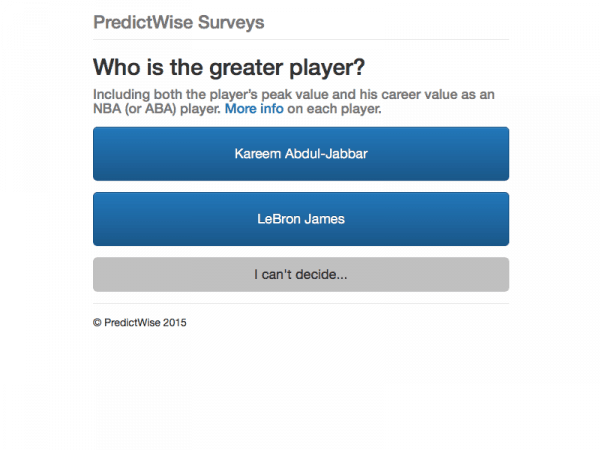 Then, as ESPN’s experts panel started to answer the first computer-generated matchups, Webb explained that the original 150 players list was reduced to 100:

“What we did was we went in and created prior rankings of those 150 names, so that if you’re one of our voters and going into our ballot, you don’t necessarily want to rank LeBron James vs. some player way down the ballot —Shawn Kemp or somebody. What you want to do is focus on LeBron James vs. Bill Russell. So, Microsoft helped us create that sort of intelligence in the ballot, which is unseen by the voters. They don’t know that that’s happening, but it’s creating really interesting matchups over and over again. And from those matchups emerged the rankings. It has a pretty deep scientific and mathematical basis to it.”

Microsoft Research economist Etan Green added that what the team tried to do is not that different from an early experimental project from Mark Zuckerberg:

“Remember when Mark Zuckerberg — before he came out with Facebook — he had this program called Hot or Not?” Green told Tech Times. “Essentially, what we’re doing is the same thing, but without the vulgarity, and we think put to a slightly more interesting purpose and with a little bit more complexity on the back end.”

If you’re wondering who made it in the top five of top five of ESPN’s all-time Top 100 NBA rankings, Michael Jordan claimed the top spot while being followed by Kareem Abdul-Jabbar, LeBron James, Magic Johnson and Wilt Chamberlain. James’s third spot stirred a bit of controversy among NBA fans, but Microsoft Research economist David Rothschild answered that “We make no presumptions that the rankings are correct in any objective sense. Our only objective is that they reflect the view of the people who voted. The debate of where LeBron should be ranked is an interesting one, and it’s one that’s generating lot of value for ESPN”.

So, even if ESPN tried to do the best rankings possible by mixing human input with Microsoft Research artificial intelligence tools, it seems some sports fans will always have a different opinion. But as other Microsoft’s teams like the Bing team are also involved in predicting sports results, we’re wondering if Microsoft Research will find other use cases to its machine learning tools in the sports field in the future.