Microsoft is expected to make some big changes for Cortana on Windows 10 this year. We recently learned that Microsoft was testing a new look for Cortana with a windowed UI looking looking very similar to the Spotlight feature on macOS. However, a new report from Windows Central today revealed that Microsoft could go in another direction, and move Cortana to the Windows 10 Action Center.

Last year, two separate reports suggested that Microsoft could move Cortana to the Windows 10 system tray, adding a new conversational UI along the way. A couple of weeks before that, Microsoft also mistakenly posted a picture of a new “Control Center” which included Quick Actions from the current Windows 10 Action Center, plus other handy features such as a brightness slider.

Zac Bowden from Windows Central kind of connected these two changes today. According to his latest report, Microsoft may decouple Cortana from Windows Search and move it to a redesigned Action Center, which could lose Quick Actions:

According to my sources, the Cortana and Action Center combination will allow users to filter between or see Cortana’s cards and notifications together. Cortana’s new chat-based UI will also live in the Action Center as Microsoft going to be moving Quick Actions out of the Action Center and into a new, dedicated Control Center.

The report also included some details about how the redesigned Action Center with Cortana could look like. The good news is that despite the addition of a conversational UI for the digital assistant, voice commands should remain available:

We’re also told Microsoft is working on an updated design for the Action Center that will better fit Cortana’s features and new chat-based UI. Of course, users will still be able to use voice commands to interact with Cortana, with features like “Hey Cortana” remaining intact. It is likely that the addition of Cortana in the Action Center will see the entire Action Center get rebranded, as the “Quick Actions” are moving out of the Action Center anyway.

There are still a lot of unanswered questions, including how these changes will impact users around the world who don’t have access to Cortana. As the digital assistant is currently front and center on Windows 10, you could also argue that burying it within the Action Center will make it even less visible to users.

It’s also not clear what will happen to the windowed UI for Cortana that surfaced in recent Windows 10 Insider builds. Could it survive as an evolution of Windows Search, and become an equivalent to Spotlight in macOS? That could make sense, unless Microsoft prefers to stick with the current Windows Search UI (without Cortana). 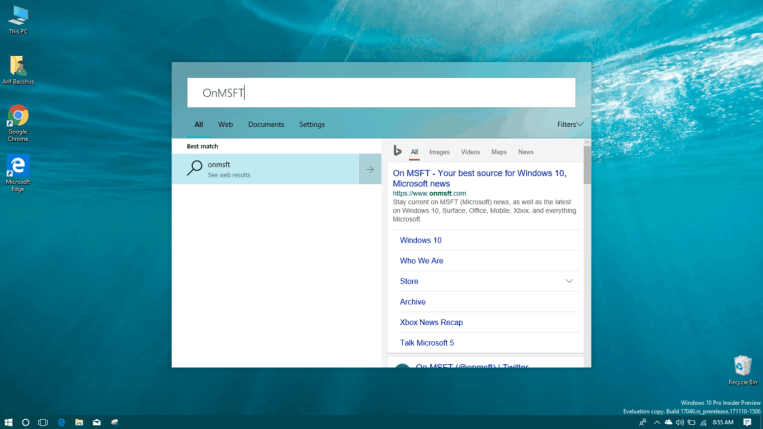 “We believe Microsoft is hoping to get these changes out in time for Redstone 5 in the fall of this year, but as always, those plans could change,” wrote Windows Central. Do you think it’s time to finally separate Cortana from Windows Search? If so do you think it makes sense to integrate it within the Action Center? Sound off in the comments below.