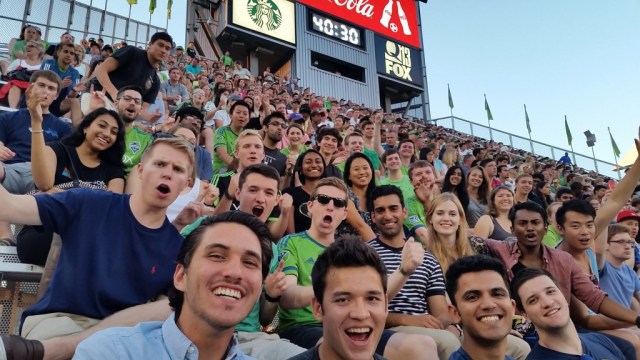 Like almost all tech firms, Microsoft is battling to recruit the best and brightest from this year's college class to come and work for the Redmond giant, only it appears that Microsoft recruiters may have gone a little far. A Twitter user posted an email his roommate purportedly got from a Microsoft recruiter yesterday, and it's been getting quite a bit of attention on Twitter, already with over 600 retweets and over 1,000 likes:

My roommate received this email from a Microsoft recruiter today. pic.twitter.com/90Qwr78eGO

The email is littered with every "cool kids" catch phrase the recruiter could think of, apparently, addressed to "bae intern! <3", and inviting the interns to a recruiting event and an exclusive after party with "hella noms, lots of dranks, the best beats, and just like last year, we're breaking out the Yammer beer pong tables!"

The tweet is understandably getting lots of comments, some of them quite hilarious:

You wake the next morning with no memory of how you got home, and all your computers now have WIndows 10 on them.

Still, we doubt that many college seniors, even ones in Microsoft intern programs, would turn down a chance at playing "Yammer beer pong," but maybe that's part of the problem.

Have you been subjected to over-the-top recruiting tactics? Did Microsoft go too far? Let us know in the comments below.

Update: Microsoft responded to our query with the following:

The email was poorly worded and not in keeping with our values as a company. We are looking into how this occurred and will take appropriate steps to address it.

Join "The Arena" and chat with Halo Pros on Skype