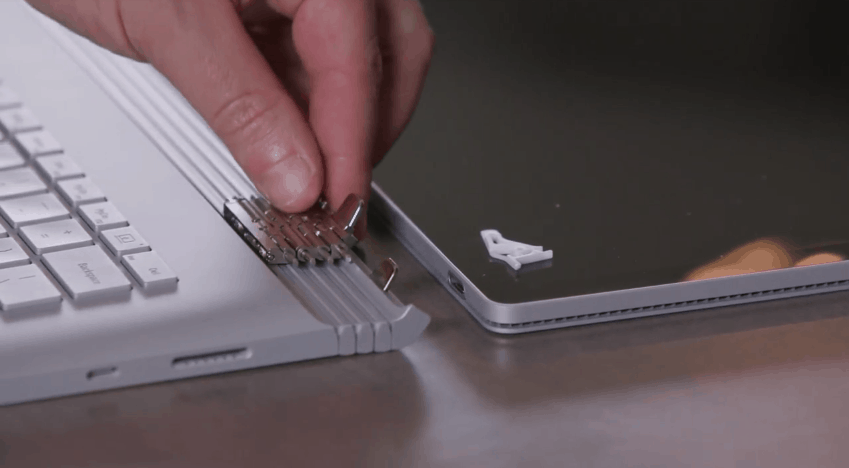 Following the release of the Surface Laptop and new Surface Pro in June, Microsoft will launch a new Surface Book 2-in-1 laptop next month, including the first-ever 15-inch device in the family. While we already know all the details about the specs of the 13.5” and 15” Surface Book 2 models, Microsoft published yesterday a new video where Surface team members Peter Kyriacou and Dan O'Neil give an in-depth look at the hardware design of Microsoft’s “ultimate laptop.”

One of the most fascinating parts of the Surface Book 2 remains the dynamic fulcrum hinge, which internals has been redesigned for the best with this new iteration. The detach mechanism is now faster and more reliable than ever, and the new hinge arm includes a ceramic material, which thermal insulator properties allows the arm to not expand or contract. Surface Design Director Dan O’Neil explained:

The hinge has been completely re-eingereed. We went from having multiple parts in a hinge that was difficult to manufacture and difficult to design around to a hinge now that is essentially a module. And it’s been consolidated into one really well-controlled, precision-engineered part assembly, and what’s that’s done is it’s helped us basically reduce bounce in the system.

The 8-minute long video also offers a sneak peek at the Surface Design Lab where the Surface team prototypes new devices. "What it's about is being super relentless about every detail, and the only way you can do that is if you continually iterate," explained O'Neil.

In case you missed it, Microsoft released the results of its first quarter 2018 fiscal year earnings yesterday and the Surface division saw a 12% YoY growth to $1,037 billion. Microsoft said that the growth was mostly driven by sales of the new Surface Laptop, and it will be interesting to see if the Surface Book 2 can contribute to the growth of the division in the next quarters. With their top-of-the-line NVIDIA GPU and bigger batteries, the latest Surface Book models are the most powerful and versatile devices in the Surface family, and they should likely appeal to a broader audience of creative professionals, MacBook Pro users and even gamers.