Windows 10 Taskbar just got better thanks to build 14328 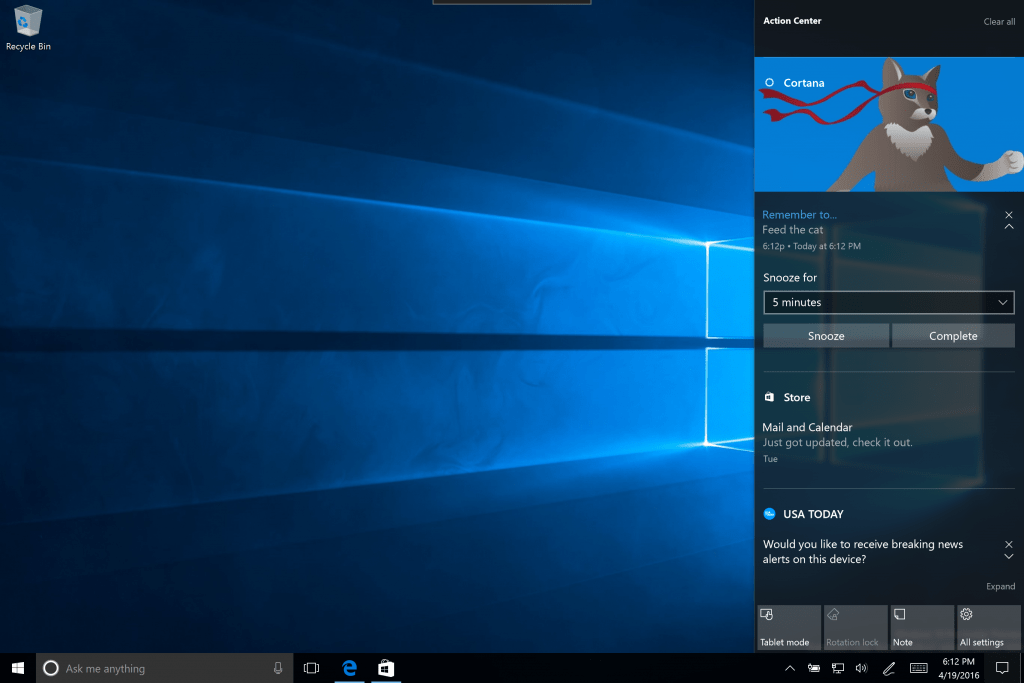 Microsoft released one of the more exciting Windows 10 Insider builds this morning, chock-full of new features and fixes. Build 14328 incorporates a number of the new stuff the company introduced at Build 2016, and so there are quite a bit of new toys for Windows Insiders to check out. One of the newest are updates to the Windows 10 Taskbar, which promise to make things a little easier to manage.

First up is the new calendar integration in the Taskbar clock flyout. Simply put, your daily calendar is now displayed in the otherwise far-less-useful TaskBar clock. Just click on it to see what events you have upcoming.

Now you can glance at your upcoming calendar events right from the Taskbar.

Taskbar Clock On All Monitors

Just as it sounds, the Taskbar clock will now show up on all monitors. That will be particularly helpful for this author, who uses three monitors to keep up with the Microsoft news cycle.

If you’ve ever used iOS, you’re likely familiar with app badges, which provide quick insight into apps that have pending notifications. Microsoft has decided to implement the same concept in Windows 10, adding badges to the Taskbar icons for Universal Windows Apps. And so, no need to go to the Start Menu with its live icons just to see if you have any new email messages–just glance at the icon on the Taskbar.

Taskbar settings are no longer contained in their own dialog. Instead, they’re aggregated into the Settings app, which can be accessed by itself from the Action Center or via right-click on the Taskbar itself.

If you have more than one audio device available, you can now click on the volume icon on the Taskbar to select which device you’d like to use for playback.

You can now select the playback source from the speaker icon on the Taskbar.

Sometimes it’s the little things that matter, and Microsoft has made a couple of other smaller updates that further enhanced the Taskbar. First, there’s a new File Explorer icon that’s a bit more fancy.

Second, the Action Bar button is also badged, showing you any missed notifications, and the button is now moved all the way to the right of the Taskbar to make it easier to access.

That’s it for the Taskbar in build 14328. Let us know in the comments what you think of these updates, and what else you’d like to see in future builds.